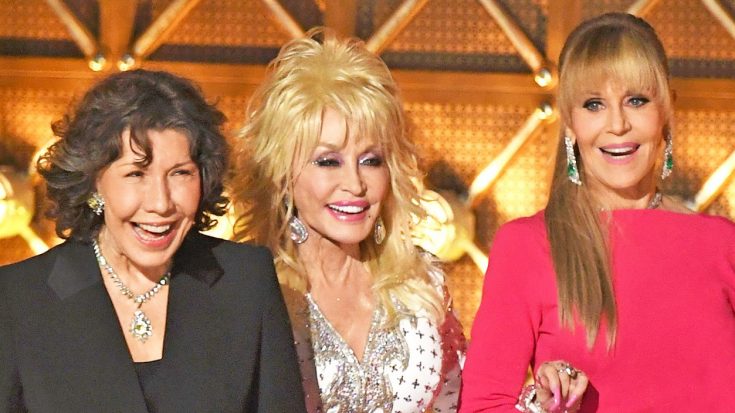 In the past few years, the leading ladies from the film 9 to 5 have tried several times to have a public reunion.

Jane Fonda and Dolly Parton were set to be present co-star Lily Tomlin with the Lifetime Achievement Award at the Screen Actor’s Guild Awards in January 2017, marking the first time all three actors would be together publicly since their 1980 feature film.

At the last minute, Fonda backed out, so it wasn’t a complete reunion. Fonda and Tomlin currently star on the Netflix series Grace & Frankie, but Parton has yet to make an appearance, despite fans’ pleas.

Finally, after 37 years, Parton, Tomlin, and Fonda were together on the same stage at the Emmy Awards on Sunday night (Sept. 17). Walking out with their arms linked together, they received a standing ovation from the famous audience, with some actors noticeably freaking out by their reunion.

Presenting the award for Outstanding Supporting Actor in a Limited Series or Movie, Parton joked about her need for “support.”

“Well, I know about support. If it hadn’t been for support, ‘Shock and Awe’ here would be more like ‘Flopsie and Droopy’,” she says with a laugh, pointing to her breasts.

Fonda and Tomlin got a little political in their speech, but in typical Dolly Parton fashion, she stole the spotlight with her humor! The reunion was short and sweet, but it was worth the wait! It seems as though these ladies hadn’t skipped a beat in almost 40 years.

Watch the 9 to 5 reunion below.