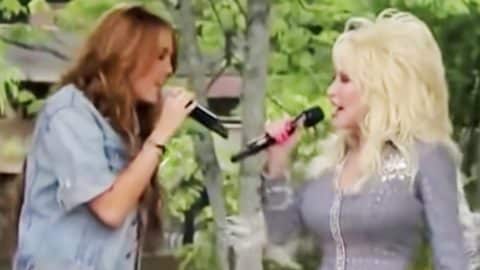 Performing for a Hallmark event, Parton was the epitome of glamour in her countrified, gray dress and bubbly persona. Addressing her audience, the country legend riled up her fans as she revealed her upcoming duet partner.

“My goddaughter, Miss Miley Cyrus,” Parton screamed to her crowd, prompting them to rise to their feet and give the talented young woman a standing ovation.

After six years, Miley Cyrus and her godmother Dolly Parton will once again be singing "Jolene" together on The Voice on the November 29th. pic.twitter.com/7hJOd7mncx

Once embracing in a warm hug, the two country gals rode into their sensational performance of Parton’s timeless hit “Jolene.”

“Your beauty is beyond compare/ With flaming locks of auburn hair/ With ivory skin and eyes of emerald green,” Parton serenaded Cyrus, caressing her hair and admiring her striking beauty. The young girl returned the favor, singing to the blonde bombshell, “Your smile is like a breath of spring/ Your voice is soft like summer rain/ And I cannot compete with you/ Jolene.”

This might be the first time Parton and Cyrus performed this song together, but since then, The Voice coach has regularly performed her godmother’s hit at live shows, including this now-viral “Backyard Session,” which has racked up over 166 million views since its release.

Fans were elated by the performance, craving more of the stars’ flawless blend and admirable love for one another. You can watch the performance for yourself by clicking the video below.