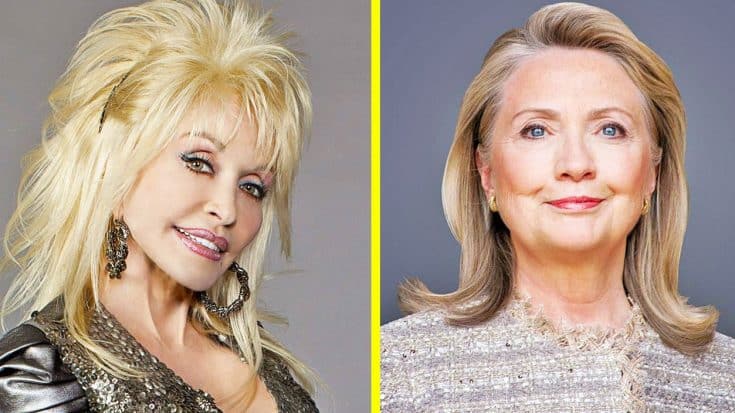 While being interviewed by the The New York Times on June 24, the country legend was asked to share her opinion of Democratic presidential candidate, Hillary Clinton. Parton had already commented about Republican presidential candidate Donald Trump before, saying “I guess me and Donald have similar hair.”

But all along, Parton has never officially endorsed a candidate or shared who she’s voting for. Rather, she’s chosen to speak about each candidate through the use of her signature sense of humor. She did the same when she was asked about Clinton during her interview with The New York Times.

“I think no matter if it’s Hillary or Donald Trump, we’re gonna be plagued with PMS either way — presidential mood swings!” she said.

Since Parton was specifically asked if she thought a woman would make a good president, she also commented on that, saying, “I personally think a woman would do a great job. I think Hillary’s very qualified. So if she gets it, I’ll certainly be behind her.“

Following Parton’s interview, many reports interpreted her words as an official endorsement of Clinton. Her comment ended up generating nationwide coverage, and Parton experienced backlash from fans for supposedly supporting Clinton.

Finally, after seeing one of these reports on television herself, Parton decided to clear the air, sharing with her fans on social media that her statement about Clinton was by no means an official endorsement. In true Parton style, she also included a bit of humor in her statement:

“My comment about supporting a woman in the White House was taken out of context. I have not endorsed Hillary Clinton nor Donald Trump. I try not to get political but if I am, I might as well just run myself ’cause I’ve got the hair for it, it’s huge, and they could always use more boobs in the race. But seriously, I have not decided who I’m voting for.”

Many fans were glad to hear that Parton had set the record straight concerning the reports, and applauded her for not publicly endorsing either candidate.

Parton has too much on her plate as it is to be worried about politics. She’s on her first major tour in 25 years, has a new album set for release, and is busy planning the sequel to her Coat of Many Colors film, among many other things. You can watch her perform the song that inspired the film in the video below.