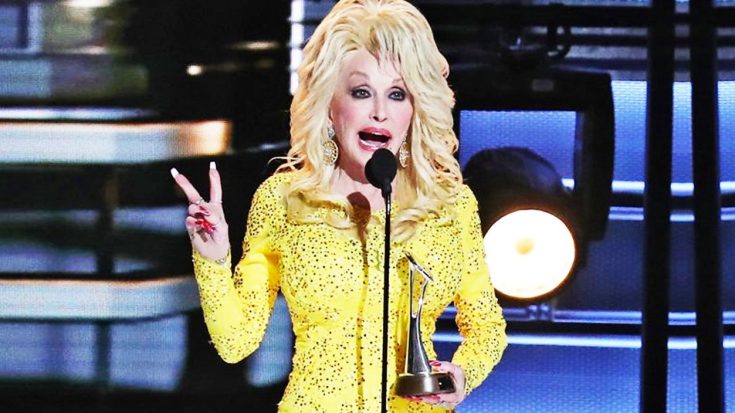 Blessed with one of the biggest honors of the night, this country legend was forced to exit stage left in the middle of her acceptance speech and never got to finish what she had worked so hard on.

Dolly Parton is a true American treasure and a wonderful part of the world of country music. She has given so much wonderful and touching music to the world that the CMA chose to honor her with the Willie Nelson Lifetime Achievement Award during this year’s CMA Awards ceremony – but there was one big part of the award missing: her acceptance speech!

After being announced as the recipient of the award, Parton also got a heart-warming tribute from some of country music’s biggest female singers and walked on stage to accept the honor and speak about what it means to her.

That lasted for just a brief moment before the crew behind the show signaled her to leave the stage – forcing her to cut her speech short!

But, what was the reason for her rushed time on stage when accepting one of the biggest honors given during the night?

According to Rolling Stone’s interview with the illustrious performer, it was simply because of time. They had taken up too much time with all the other things before her that they had to cut her speech from the event.

“I had a whole big speech on the teleprompter!” Dolly revealed enthusiastically. “They said we were running short, and I said, ‘Well I’m always running short! If I’m running at all, I’m short.’ But anyhow, I just had a lot of people I was gonna thank and I just had a few little corny jokes. I said what I need to say, and I understand time and shows and you can’t have time for everything. It wasn’t all about me. It was just a moment of mine and I appreciate it.”

Watch the video below of Dolly Parton speaking with press after the event, and at the end she touches on her shortened speech.

Do you think they should have cut her speech short? Let us know in the comments.