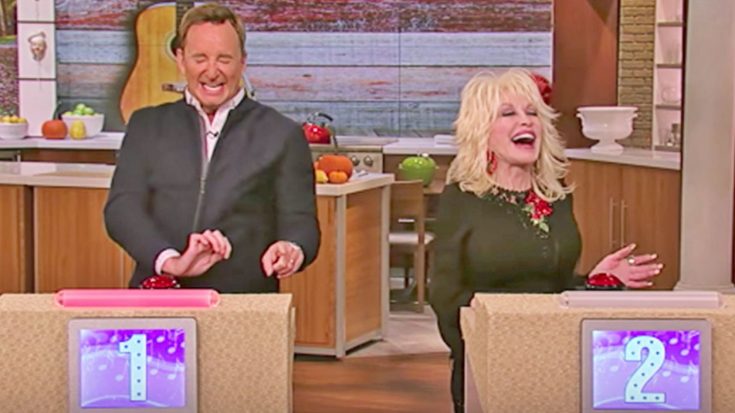 While appearing on the daytime talk show The Chew, country music legend Dolly Parton was put to the test. We know all about Parton’s big personality and her incredible sense of humor, but this is a new hysterical side to her we wish we’d see more often!

She was there to promote her brand new children’s album I Believe In You, but things got a little competitive when she was challenged to play a trivia game about herself with her self-proclaimed biggest fan and co-host of the show, Clinton Kelly.

To prove that Kelly was really a super fan, he was introduced by his co-hosts as “the president of the New York chapter of the Dolly fan Club.”

Kelly and Parton each stood behind a podium with a buzzer and had to answer trivia questions about the “Jolene” singer’s life and career. If they got the question correct, they earned a point, but if they answered it wrong, their opponent earned the point. The first person to five points would be named the winner.

The first question was centered around her film 9 to 5 and the name Jane Fonda called their boss, which of course is, “A sexist, egotistical, lying hypocritical bigot!”

Kelly buzzed in faster than Parton, and blurted out the answer, but did it before the end of the question, so Parton was awarded the point. For the next question, co-host Carla hall asked, “What was the occupation of the real-life inspiration behind ‘Jolene’?”

This time, Parton buzzed in first and even taunted Kelly saying, “You don’t know?!” She informed her “biggest fan” that the “Jolene” inspiration was a bank teller.

Other questions included what animal the groom’s cake was in Steel Magnolias, on which album she purposefully misspelled a word, what animal the cloned creature named after her was, what her character’s name was in The Best Little Whorehouse In Texas, which Dolly-centered competition Parton entered and lost, and which country legend was her first crush.

At one point, Parton was losing 4-2, but then came back and tied it up. It came down to one question that would decide the winner.

Watch the video below to see who won!