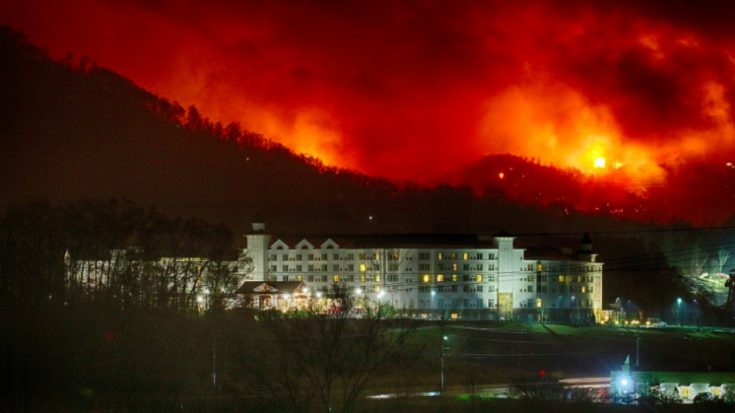 East Tennessee welcomed some much needed rain Monday night, but it did little to stop the wildfires that are ravaging the Sevier County resort towns of Pigeon Forge and Gatlinburg. The fires prompted evacuations of the towns’ residents and tourists as they were placed under a Level 3 State of Emergency.

As of late Monday night more than 14,000 people had been evacuated and it was reported that at least 30 structures were burning including a 16-story hotel and an apartment complex.

In a press conference held Tuesday morning, officials confirmed that at least 150 structures had been lost or damaged in Sevier County. While no damage has been reported at Dollywood, the popular theme park owned by country star Dolly Parton, guests staying in rooms at Dolly’s DreamMore Resort and Dolly’s Smoky Mountain Cabins were forced to evacuate and the park suspended operations temporarily.

Due to area wildfires, we have suspended park operation for Wed., Nov. 30 and lodging is open on a limited basis. https://t.co/DuVshyGE73

Many of country music’s biggest stars took to their social media accounts to share their concern for the people of Gatlinburg and offer their prayers, including Travis Tritt who has band members who live in the area.

One of my favorite vacation spots is under the threat of fire tonight. The Smokey Mountains of Tennessee are burning. #prayforgatlinburg

Two of my band members live very close the fires around Pigeon Forge and Gatlinburg. Their homes have been spared, but others have lost all.

Our thoughts are with our neighbors over in #Gatlinburg and #PigeonForge. Prayers for those fighting those terrible wildfires. ?

Praying for all of those affected by the fires in the Gatlinburg, Pigeon Forge area. So awful…

I am so worried for everyone in Gatlinburg, TN… Please be safe…#prayingforgatlinburg

Praying for Gatlinburg. Bring on the rain

The American Red Cross is not looking for untrained volunteers at this time, but is accepting donations for evacuees and first responders. If you would like to help, you can send a $10 donation by texting “REDCROSS” to 90999.