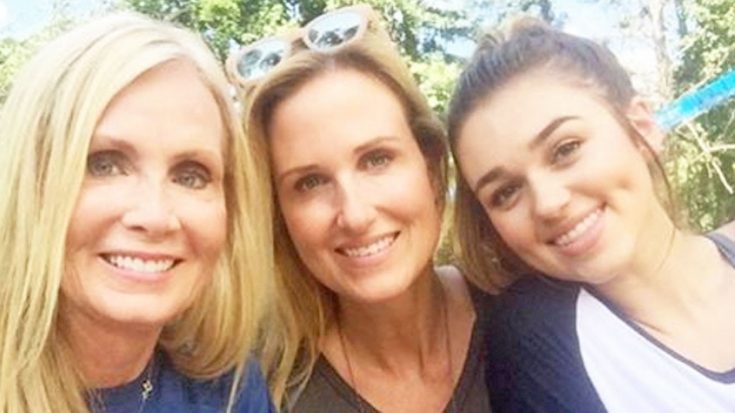 The Duck Dynasty family may be large, but they are extremely close knit. In fact, a lot of them live in the same cul-de-sac, which folks often call “Robertson Row”.

According to Missy Robertson’s most recent blog post, “Out of eight homes on our little street, the four Robertson brothers live in four of them. The other four are filled with either extended family or good friends.”

One of the other four houses is occupied by Chrys and John Howard, Korie Robertson’s parents. They have appeared in several Duck Dynasty episodes as guests to dinners, parties, and weddings, and finally were formally introduced to viewers in the final season, when the family helped Willie restore an old tennis court at Camp Ch-Yo-Ca, the summer camp they all attended as kids and now send their children to.

Chrys just so happens to be the Camp Director of Camp Ch-Yo-Ca, which is also the place Willie and Korie first met in fourth grade. She also went on tour with Sadie on the Live Original Tour and served as tutor for all the kids still in school.

On Monday evening (April 24), Chrys took to Instagram to share some sad news with her fans and followers.

“This past week one of my cousins lost his battle with cancer and gained his heavenly reward,” she captioned the photo of her cousin looking out into the ocean.

She revealed that her cousin was listening to a sermon on his computer with his eyes closed, attempting to take notes and continue to learn from the Lord, just moments before he took his last breath. She finished the emotional post with a word of advice.

“Let’s all just slow it down a bit and write down what we’ve learned about God. Then tell someone else. Thank you, Glenn Durham, for fearlessly doing that your whole life.“

Seeing as how close the Robertson family is, we know they are in mourning. Sending our prayers to Glenn’s immediate family and all those who knew him.

Monday Hug: This past week one of my cousins lost his battle with cancer and gained his heavenly reward. He was a devoted servant of God who spend his adult years preaching the gospel. His sister shared that on his death bed while listening to a sermon on the computer he, with eyes closed, gently motioned for a pen. With pen in hand, he slowly moved it around as if he were taking notes. You see, up until he took his last breathe, he was learning about God and thinking of sharing that knowledge with others. What a precious example for all of us. Let's all just slow it down a bit and write down what we've learned about God. Then tell someone else. Thank you, Glenn Durham, for fearlessly doing that your whole life. Hugs, Chrys (2-mama) photo cred to his son @bwdurham @a.mom.thing