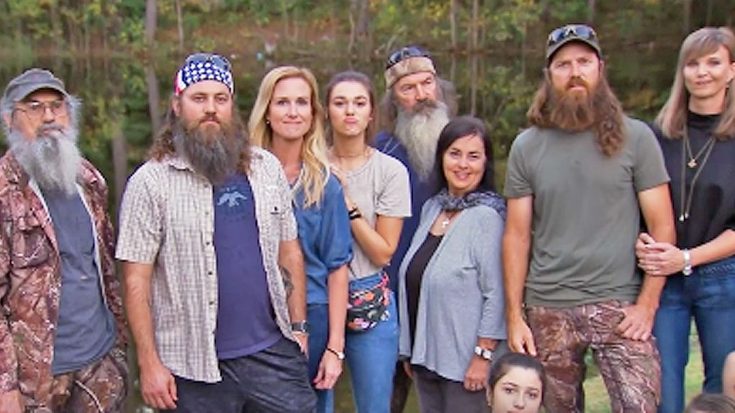 After their Season 11 premiere, the Duck Dynasty family made a huge announcement that no one saw coming.

After five years and eleven seasons of the hit show, they “decided as a family that this will be the final chapter of the Duck Dynasty series“.

Korie, Willie’s wife, assured us that this will be the best season yet, and that we “might see [them] again on a special or two“.

We’ve seen their children grow up right in front of our eyes and as fans of the show, we feel a personal connection to each and every family member.

Some of the Robertson family members took to social media to thank fans for giving them the opportunity to have a show and to spread their message to the world.

Take a look at some of them below.

I just want to say thank you to all our fans for your commitment and support in watching our silly crazy fun family all these years!!! Y'all are the best fans ever!!!!!! We love you!!!!! @duckdynastyae #best #fans #ever #love

We are so thankful to every single one of you who have watched us, loved us, cheered us on, prayed for our family, and supported us along the way! I promise you it has been noticed and we are forever grateful! We have a fun final season ahead of us so stick with us! We're not done yet ?In honor of our announcement last night that this will be our final season of @duckdynastyae here's a little #tbt of our photo shoots throughout the years for the show. Can't believe it's been 5 years since we took that pic standing in the duck pond with the guys in cut off tuxes and the girls in gowns ?we had no idea at that time what was about the happen. We stood there smiling and wondering if people would actually watch our crazy family. Thank you again for following along on our journey! Our kids have grown up in front of you and we are thankful for really awesome home movies ?It's been such a fun ride!

It’s out! This will be the final season of duck dynasty after 5 years. It’s been an amazing ride. Thank y’all for the incredible journey❤️

Thanks to everyone for the past 5 years! They’ve been awesome! This last season will be great! https://t.co/X8RznBA6gT

Yes, this is the last season of Duck Dynasty. But, it is a REALLY long season, and we may do an occasional special in the future. Love yall

Watch the family’s announcement below.