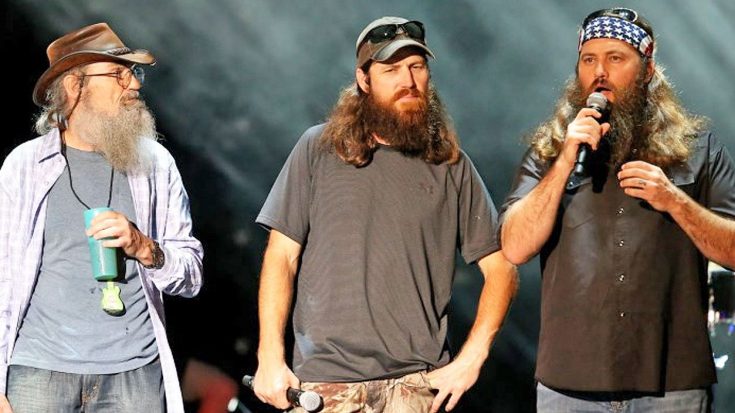 Just seconds after the Season 11 premiere of Duck Dynasty wrapped up, they dropped a huge bomb on us!

“We’re gonna make a special announcement,” he said. “It’s a big announcement from the Robertson family.”

Varney & Co. host Stuart Varney tried to get some information out of him, but it didn’t work. Robertson said, “I want people to tune in!”

In the hours leading up to the premiere, Duck Dynasty‘s official Facebook page has been counting down the hours until the BIG announcement.

They shared a video of Uncle Si teasing the announcement saying, “Hey folks, we’ve got an unbelievable, humungous, shocking announcement for you folks!”

What could it be?! We are racking our brains! Could they all be shaving their signature beards for charity? Could they be getting their own TV network? Could one of them be appointed to President-elect Donald Trump’s cabinet?

We already know that there is a spin-off show called Going Si-Ral following the Season 11 premiere, so that can’t be it.

Finally the time has come where Duck Dynasty revealed their BIG announcement and boy, it really is HUGE!

The Robertson family has revealed that this 11th season of Duck Dynasty will be their last.

“We decided as a family, that this will be the final chapter of the Duck Dynasty series,” Jase said after a few funny outtakes.

Korie assures fans, “This is going to be the best season yet. And you might see us again on a special or two.”

So make sure you tune in every Wednesday this season at 9/8c to see the final episodes of Duck Dynasty.

Whoa! We did NOT see that coming. We will definitely miss welcoming the Robertson family into our lives every week. What do y’all think of the news?? Sound off in the comments below.