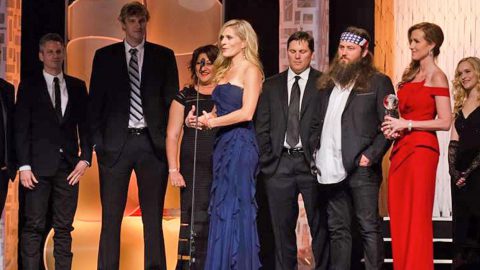 Deirdre and Scott Gurney rose to success after co-creating and producing the hit reality TV show Duck Dynasty. After 11 successful seasons, the Robertson family decided to end this chapter of their lives, but in the middle of the season, the show was making headlines.

The Gurneys were “temporarily suspended amid an internal fraud investigation” and later terminated by the Board, all the while being sued by ITV, which bought Gurney Productions back in 2012.

According to Variety, ITV’s lawsuit alleges that the Gurneys engaged in self-dealing and fraud to grow the company’s profits illegally.

The Gurneys did not  take this lawsuit lightly and fought back with a $100 million countersuit alleging intimidation and extortion. Their lawyer, Michael Weinstein, released the following statement.

“This is a blatant, desperate attempt at intimidation by ITV, a classic greedy corporate grab, solely for the purpose of enriching one shareholder at the expense of the founders who built this company into the highly valued, sustained financial success story that it is. The claims against the Gurneys are completely baseless and fraught with contradictions, inconsistencies and outright falsehoods. My clients are considering all of their legal options and are preparing to respond accordingly.”

Three months after Scott and Deirdre filed the counter lawsuit, an LA Superior Court judge “has reinstated [them] as heads of the production company,” according to Variety.

ITV appealed the decision and the Gurneys will not be able to return to running their company while the appeal is pending.

Deirdre shared the Variety article on her personal Facebook saying, “Believing in the system. Thank you all for the support. Scott and I are deeply grateful.”

Now, a few weeks after the appeal was filed, the Gurneys are “still not able to return to the company”, according to the latest report from Variety. The publication also reports that a “judge…declined a request by the Gurneys’ legal team that could have paved the way for the couple’s return to the production banner behind ‘Duck Dynasty’ and other unscripted shows.“

A status conference has been set for May 3, but according the The Hollywood Reporter, the Gurneys are on their way to winning the $100 million lawsuit.

Deirdre, who has been sharing almost every article written about her legal battle on her Facebook page, recently made a cryptic post which included a clip from the sitcom Seinfeld.

The character George Kastanza is prevented from entering his office, yet finds his way in through an air duct and calls the higher ups to tell them that he will be in his office. See her Facebook post below.

Me!!!!! Thx for the support everyone.

We know that Deirdre and Scott have been itching to get back to work, but we aren’t entirely sure what her post means! What do you think? Let us know in the comments!