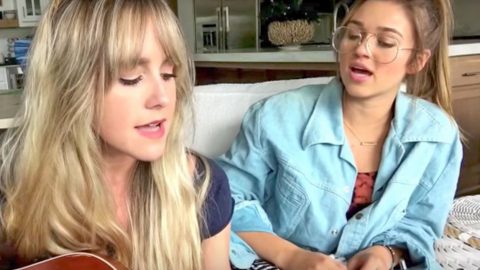 After admitting that she is scared of singing in front of people, Duck Dynasty star Sadie Robertson decided to face her fears head on by posting a video of herself singing one of the biggest songs out right now.

Although she has previously posted snippets of her singing Christian music, she admits that although Miley Cyrus’ new hit song “Malibu” is not a worship song, it spoke to her on many different levels.

While on the Winter Jam tour, Robertson became close friends with Laney Redmon, a backup dancer for Christian singer Britt Nicole and aspiring singer herself.

Explaining how a lovey-dovey pop song could relate to Christianity, Redmon says, “[The lyrics] say, ‘But you brought me here’. That’s such a picture of God, you go through these things, and you get scared of things, but wherever God wants you to be, He’ll bring you there.“

Agreeing with Redmon, Robertson added, “I think that’s so cool because if you live a life of fear, if you live a life of anxiety and panic, you kind of live in isolation and you live with prison bars in front of you that you can’t really get out of, and you know you have the key, but you just won’t get out. And as soon as you get out, you’re as free as a bird and are like, ‘Wow, I can do anything.’… you just said no to fear!”

“We know it’s not a Christian song necessarily, but it’s such a powerful message and you can definitely relate it to your lives in many different ways,” Robertson says before singing the inspiring lyrics.

The two girls harmonized while singing their favorite verses from the song, and even though she’s afraid of singing, Robertson did a great job! Watch their cover of “Malibu” below.