Willie And Jase Robertson Run Against Each Other For HOA President 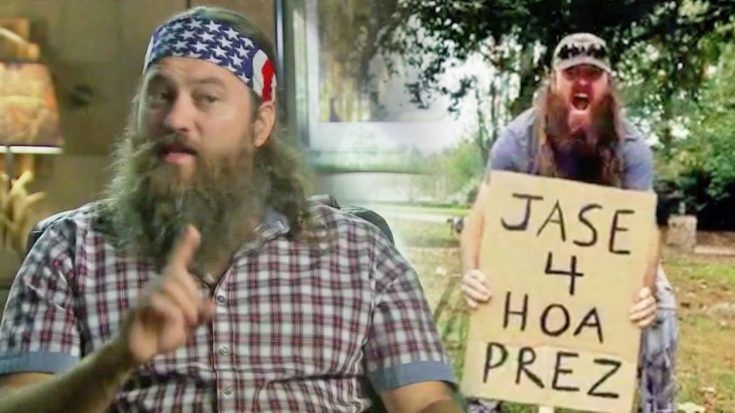 If you are a fan of Duck Dynasty, you know that Jase Robertson has a history with his neighborhood’s homeowner’s association. He has gotten in trouble for burning his leaves, dumping bacon grease in his flower bed, and owning chickens.

As a joke, his brother, Willie, nominated him for president, since the entire neighborhood knows how much trouble he gets in. Once Jase actually thinks it’s a good idea to run for president, Willie decides he has to do something to prevent Jase from winning. His solution? He runs, too!

All over the neighborhood, Jase has posted these cardboard signs that have “Jase 4 HOA Prez” painted on them. Willie takes it upon himself to remove his brother’s signs and replace them with his own, professionally made signs which included his catchy slogan, “Don’t Be Silly, Elect Willie”.

According to Willie, if Jase wins the HOA presidency, people will be burning their garbage and their dogs will be pooping everywhere!

They each give less-than compelling speeches at the HOA meeting, and after a few days, the votes are in! Which Robertson brother came out the victor? Find out in the clip below.

And the winner of the HOA election is…

And the winner of the HOA election is…

Posted by Whipclip on Wednesday, November 16, 2016