By Jennifer Pernicano on February 15, 2018
Advertisement 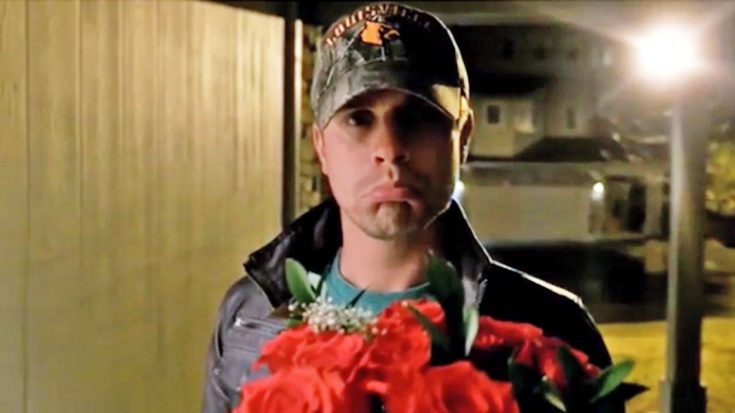 Not long ago, country singer Dustin Lynch was making headlines about his love life.

While he was performing at Stagecoach Music Festival in Indio, California in 2016, Lynch was photographed with TV personality Kelly Osbourne, daughter of rock star Ozzy Osbourne.

Rumors of a relationship began swirling, most likely because Osbourne actually called him her “boyfriend” in a photo she shared to Instagram.

“I really miss my boyfriend,” the then-31-year-old wrote, sending fans of both celebrities into a frenzy.

Rumors of them being in a relationship were gaining traction so much that Lynch had to debunk them in an interview with Taste of Country, stating, “I can confirm that we’re friends. I can deny the rumors that we’re hooking up or dating…or pregnant.”

About 10 months ago, the two reunited to celebrated their one year anniversary of being a “couple.”

“With my boo [Dustin Lynch] celebrating our first anniversary!” Osbourne captioned the clip of her and Lynch blowing out a candle on a cheesecake, which included the hashtag “#TheOddCouple.“

We know that this was all a joke and the two are just friends, but Lynch really enjoys toying with his fans’ emotions. Almost a year later, it seemed Lynch’s love life was going well, until he posted a video on Valentine’s Day (Feb. 14) of him getting brutally rejected by a woman he lovingly calls “darlin’.”

He rang her doorbell with a bouquet of roses in one hand and when she opened the door, he said, “Hey, darlin’! Happy Valentine’s Day!”

The unknown almost didn’t let him finish what he had to say before she closed the door in his face and left him standing outside with a huge frown on his face. If you think the song playing in the video may sound familiar – you’re right! It’s his duet with Little Big Town’s Karen Fairchild called “Love Me or Leave Me Alone,” which was included on his Oct. 2017 album Current Mood.

Because the caption read, “Still single…” with the emoji rolling its eyes, we know this was all in good fun, but it still doesn’t make it sting any less.

There’s always next year, Dustin! Watch his brutal rejection below.