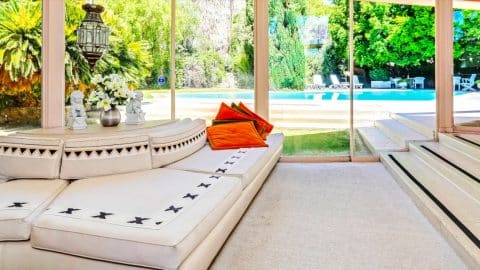 Originally built in 1960, this Palm Springs-area home has been put on and taken off the market several times in the last few years. In 2014, it was listed at $9.5 million. In 2017, the price was slashed almost in half. Now, according to the LA Times, the owners have put it back on the market for $3.2 million.

#ELVIS AND PRISCILLA ELVIS'S HONEYMOON GLAMOROUS HOME 2018:Elvis Presley's Palm Springs honeymoon home has lingered on market for years the 5,000-square-foot house on an acre lot with a pool in the backyard was famously the honeymoon home of Elvis and Priscilla Presley. pic.twitter.com/JfqfLJcGzh

The home, known as Elvis Presley‘s “Honeymoon Hideaway” housed The King and wife Priscilla for nearly a year following their wedding and he paid approximately $21,000 for his lease. When Elvis and Priscilla enjoyed the property, it sat on 1.25 acres of land, but now, it’s a third of an acre.

Each corner of the home has some piece of Elvis history and has been turned into a sort of museum in honor of the late entertainer. Now, the home that was once restored to its original decor and styling is being shopped as a possible site for development on the lots.

Fancy living like The King? Elvis Presley’s midcentury honeymoon retreat in Palm Springs, California, USA is back up for sale with another price drop. Amazing architecture. Even better if you love Elvis. https://t.co/NKVolKRi7P pic.twitter.com/1iv0LTEqWR

Presley and wife Priscilla spent their honeymoon there after tying the knot in fabulous Las Vegas back in 1967. According to some reports, the pair had intended to wed at the home, but later chose Las Vegas when they realized the neighbor was a gossip columnist and vying for the story.

There’s no telling what will become of this former love nest of The King and his wife, but it’s possible a dedicated fan will purchase the lot and retain its 1960s glamour as it sits now.

Watch The Washington Post’s story on the home from its sale in 2014 below.