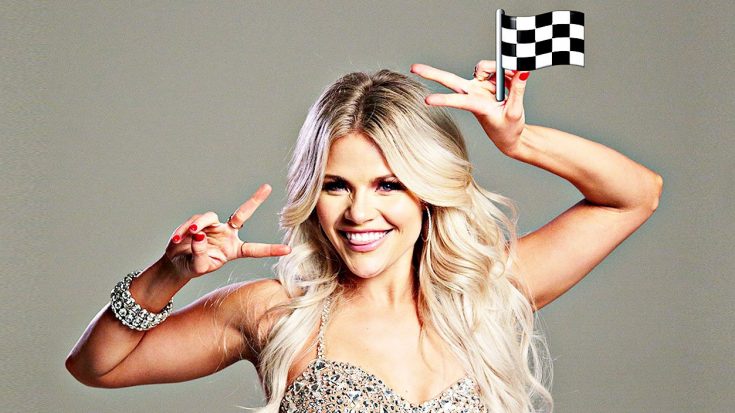 In a brand-new social media post from Dancing With The Stars, several new pieces of information are given to help put together the clues that have been handed out recently – and one of them points the finger directly at a former race car driver!

While Witney Carson might be just throwing up peace signs for fun in this new picture, she could also be indicating the number on the car, however nobody will know 100% until all the contestants are announced tomorrow (September 6th) on Good Morning America.

In the DWTS post below from Instagram, Witney Carson is seen holding two fingers up in both hands and a checkered racing flag sitting atop one. The caption tells followers to “decode the emoji” and find out who the partner is.

Many may believe that this could be NASCAR No. 22 driver Joey Logano, but other sources explain that it’s more than likely someone else!

The report from E! News claims that former actor and Formula One driver, Frankie Muniz will be joining Carson on the glossy ballroom floor. The outlet even claims to have spotted them rehearsing together.

Muniz is best-known for his appearance on Malcolm In The Middle and a slew of teen movies and TV shows throughout the 2000s. He put his acting career on hold in 2008 to pursue his dream of being a race car driver and competed in the Champ Car Atlantic Series and took home 22nd place overall.

Check out the full leak from Dancing With The Stars below and watch Frankie Muniz discuss his passion for racing in the video and let us know what you think in the comments!

Decode the emoji to guess who the Pros are paired with. Our all-star cast is revealed TOMORROW on @goodmorningamerica! Who's watching with us? #DWTS