By Miranda Raye on August 9, 2017
Advertisement 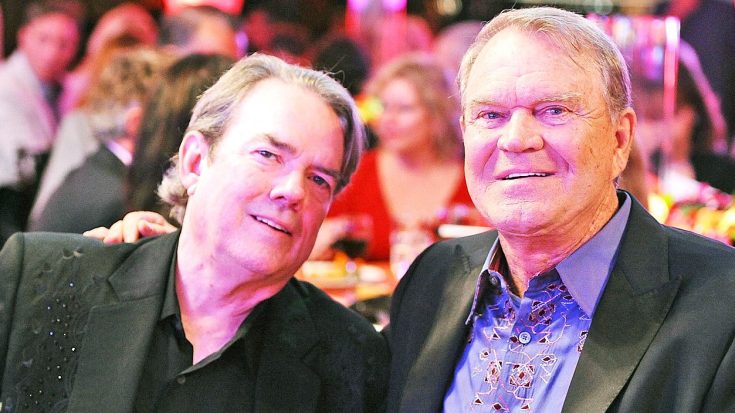 When a skilled songwriter and a talented singer join forces, the resulting product is practically destined for success. If a pairing works one time, an artist is likely to turn to the same songwriter in the future, and vice versa.

That’s exactly what happened with songwriter Jimmy Webb and country music icon Glen Campbell. While Webb has penned songs for many notable artists over the years, he is perhaps best known for writing some of the biggest hits of Campbell’s career.

Webb wrote some of the main songs that helped define Campbell as an artist, including “Wichita Lineman,” “Galveston,” and “By the Time I Get to Phoenix,” just to name a few. Campbell helped turn the songs into major chart hits and award-winners, making him and Webb an unstoppable team.

But Webb and Campbell were more than just collaborators, they were friends. So when Campbell passed away on Tuesday (August 8), Webb was understandably devastated.

Webb fondly remembered Campbell in a message that he shared with Variety. He opened his message by writing about how Campbell’s passing has left a great void in the music industry:

“Let the world note that a great American influence on pop music, the American Beatle, the secret link between so many artists and records that we can only marvel, has passed and cannot be replaced. He was bountiful.”

Webb spoke of the kindness that Campbell showed to others, saying that he was always courteous even when he was having a bad day. He then moved on to talk about the special bond they shared as friends, at one point referring to Campbell as his “big brother“:

“When it came to friendship Glen was the real deal. He spoke my name from ten thousand stages. He was my big brother, my protector, my co-culprit, my John crying in the wilderness.”

Webb acknowledged the fact that his message was short, but said he was “too upset to write well or at any great length.” He concluded his message by asking readers to keep Campbell’s family in their prayers, and to say a little prayer for the Webb family as well.

The strong bond that Campbell and Webb shared was ever-apparent, just as it is in their performance of “Wichita Lineman” in the video below. We hope you enjoy it.

May Campbell rest in peace. Like Webb, we will miss him terribly.