By Jennifer Pernicano on August 31, 2016
Advertisement 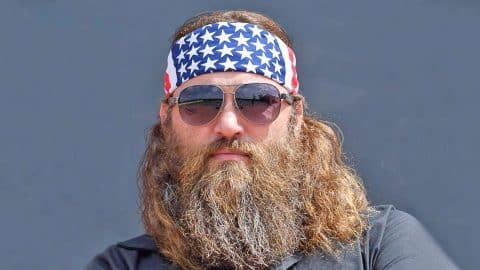 Thanks to Korie Robertson, Willie is looking very different!

In the ten seasons of Duck Dynasty, we have yet to see Willie Robertson without an American flag bandana. It’s pretty much his trademark.

On a recent lunch date with his beautiful wife, he was shockingly NOT wearing a hat or bandana and she, of course, had to document it.

Comments flooded the photo, which revealed that fans were freaking out over his exposed forehead!

Below are some of the best comments.

“Is Willie squinting because the lights to bright without his protective bandana?” one fan wrote.

Another comment said, “I knew there was something Missing……”

“You mean he’s not hiding a receding hair line? Who’d thunk it”.

What do you think about his new look?! See the photo below.