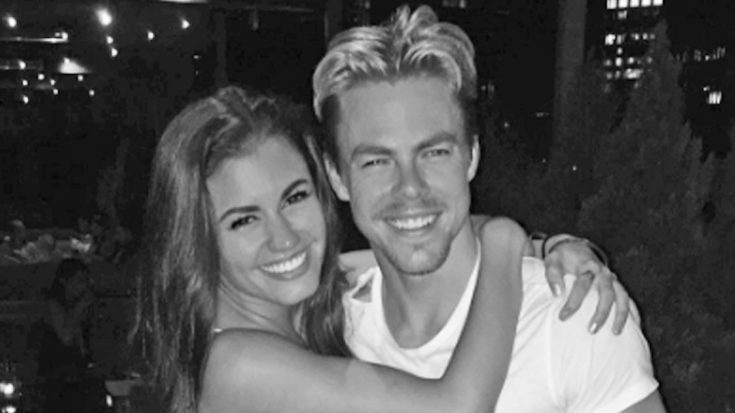 Their relationship is so low-key, you may not have even known about it! Dancing With The Stars favorite Derek Hough has been dating DWTS troupe member Hayley Erbert for some time now and from the looks of things, it’s not slowing down any time soon!

They met when she was a dancer for their first Move tour, and was encouraged by the brother-sister duo to audition for DWTS. She was then interviewed and cast as a troupe member and has been dancing every Monday night since Season 21.

While they don’t make too many appearances together in public or on their social media accounts, Derek’s sister, Julianne Hough often shares family photos with Hayley in them. Check out a few photos from the Hough family Christmas trip below. Derek and Hayley are front and center of the group photo.

Derek also shows Hayley in his Instagram and Snapchat stories, one of which was from the DWTS show Monday night, where he performed alongside his sister to give the viewers a sneak peek of what to expect from their upcoming Move Beyond Live Tour.

Coincidentally, it was also Vegas Night in the ballroom, and Hayley was part of a few different dances throughout the episode, including Charo’s number, which was focused around a Vegas wedding.

Hayley shared a photo on Instagram of her in her costume, a white wedding dress, which sent fans into a frenzy!

I bet you can't guess what the theme is this week. ? #DWTS

“Hope u got some ideas Mr Hough,” one fan wrote.

She also captioned a short Snapchat clip with, “I can hear the bells,” to which a fan wrote, “Oh we sure hope so!” Another wrote, “We can too!“

Of course it’s not a real wedding dress, but Derek did film his reaction to seeing her in in it! Watch it below.