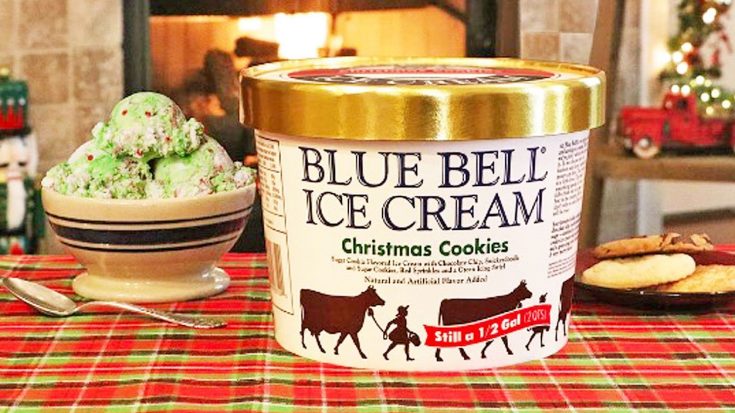 Halloween may be on the horizon, but Blue Bell is already thinking about a different holiday. It looks like Christmas is coming a bit early this year, because the ice cream company just announced the return of one of its beloved holiday flavors.

In early October, the company revealed that it would be stocking store shelves with two new Christmas-themed flavors. Both peppermint-based, the first flavor is appropriately named “Peppermint.” The second is called “Peppermint Bark,” and contains dark chocolate and white chocolate chunks along with crushed peppermint candy.

On Monday (October 23), Blue Bell created more excitement for ice cream enthusiasts when it unveiled the re-release of its seasonal flavor “Christmas Cookies.” The flavor finds its foundation in a sugar cookie ice cream which is mixed with red sprinkles and a green icing swirl.

But that’s not all! The ice cream also contains chunks of not one, not two, but three different cookie flavors. Chocolate chip, snickerdoodle, and sugar cookie pieces can be found throughout the ice cream, meaning that each bite will be its own delicious experience!

Blue Bell personally described the Christmas Cookies ice cream as a “very merry” flavor. With all of those different cookies and the cheery Christmas colors, we think that’s an accurate description.

Since the Christmas Cookies ice cream is on a limited-edition release, you can bet that people will be rushing to stock their freezers with tubs of the delightful flavor. Unfortunately, Blue Bell products are primarily offered in the Southern U.S., so if you want to taste some Christmas Cookies you may have to plan a Christmas vacation!

You can check Blue Bell’s product locator here to see if they sell their ice creams in your area.

Every time we hear about the Christmas Cookies ice cream, we can’t help but think of George Strait‘s famous Christmas song of the same name! Get yourself in the Christmas spirit by tuning in to it below!