By Jennifer Pernicano on March 23, 2018
Advertisement 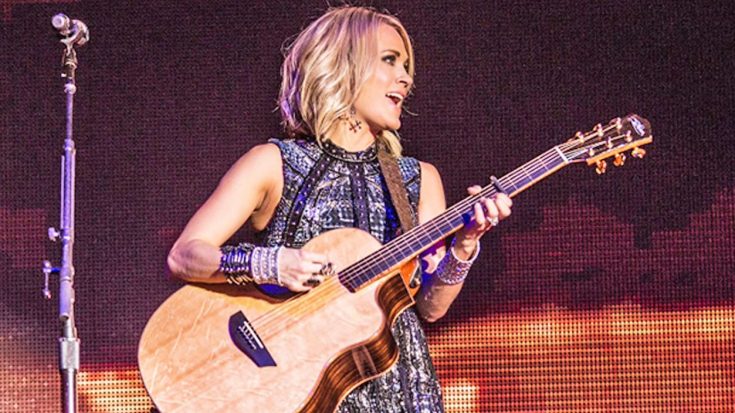 This is not a drill!

For the first time since her November 2017 fall that has kept her out of the limelight, Carrie Underwood has scheduled her very first performance.

Just days after co-hosting the CMA Awards for the tenth time, Underwood fell down on the stairs outside her Nashville home. She was rushed to the hospital, where they performed surgery immediately on her broken wrist.

What we didn’t know at the time, was that her broken wrist wasn’t the only injury she sustained. In a note to her fans on New Year’s Day, the “Church Bells” singer revealed she needed over 40 facial stitches.

“In addition to breaking my wrist, I somehow managed to injure my face as well. I’ll spare you the gruesome details, but when I came out of surgery the night of my fall, the doctor told [husband] Mike that he had put between 40 and 50 stitches in.”

She added that she was healing, but “not quite looking the same,” and wanted to let fans know why she would look a little different once she was ready to get in front of a camera, or perform, again.

The only 2018 performance she had scheduled before her accident was WE Fest in Minnesota in August, but now we know she will be returning to the stage a bit sooner. The Country Music Association just revealed the lineup for their annual CMA Fest – and Underwood is on the bill!

CMA Fest is a music festival that will take place from June 7-10 in Nashville at Nissan Stadium, as well as three nearby stages that will feature dozens more country singers throughout the festival’s four days.

To get y’all in the mood for Underwood’s triumphant return to the stage, take a look at her latest music video for “The Champion” below.