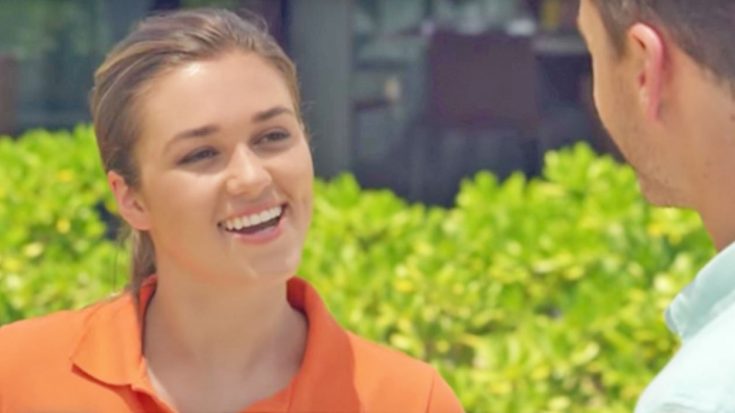 Before the A&E reality show Duck Dynasty ended, Sadie Robertson revealed that she was open into pursuing a new career in acting. She already appeared in two films, God’s Not Dead 2 and I’m Not Ashamed, the Pure Flix movie about the first victim of the Columbine High School shooting, Rachel Joy Scott.

Since then, she showed off her acting chops in the “Past the Past” music video for country artist Lawson Bates and we recently learned she would be making her Hallmark Channel movie debut. Other than the title of the film, which is Sun, Sand, and Romance, we didn’t know too much about the movie – until now!

The movie premieres on the Hallmark Channel on Saturday, August 26, but she stopped by Access Hollywood to give hosts Kit Hoover and Natalie Morales a sneak peek of her role.

She will be playing Chloe, the assistant activities director at a summer resort who is described as a people pleaser and a person who always wants to do whatever she can to help.

Robertson admitted to Hoover and Morales that being in a Hallmark movie was a big dream of hers, and explained how it all happened.

“It’s actually kind of crazy, and a dream because it was a dream for me to be in a Hallmark movie,” she said. “The acting world is totally different than the world that I’m used to, so I wasn’t really sure that I wanted to be in moves or do acting, but my agents were like, ‘Look this would be great for you,’ and I’m like, ‘Yeah, but if I’m in a movie that’s not very appropriate and then I go speak and motivate young kids to make the better choice, just doesn’t add up.'”

She realized that the only type of movies she could be in that would be “on brand” with the message she sends to young adults and teens were Hallmark movies, and as they say, the rest is history.

Watch the first look at her role in Sun, Sand, and Romance below, as well as her full interview with Access Hollywood!