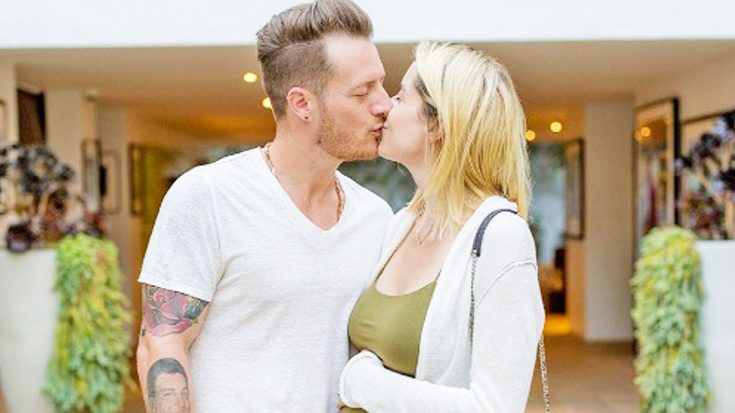 In June, Florida Georgia Line‘s Tyler Hubbard and his wife Hayley shared the news that they are expecting their first child together. The following day, the couple discovered their baby’s gender, and happily announced that they were expecting a boy!

Two months later, the couple learned some surprising news. The first blood test they took to determine the gender ended up being incorrect…so they’re actually having a girl!

“Really really excited about this next chapter even if God does like throwing us a curve ball every now and then,” Hubbard wrote in an Instagram post.

Since then, the couple has been good about keeping fans updated on how Hayley’s pregnancy is going. The two recently shared a series of pictures that show her growing baby bump.

Hayley first shared a photo of herself on the beach, with her baby bump clearly visible through her tight tank top. “She’s finally poppin out, kicking like crazy, and making me hungrier than I’ve ever been!” she wrote.

Last week at 23 weeks ?She's finally poppin out, kicking like crazy, and making me hungrier than I've ever been! All is good in her little world ? #23weeks

A few days later, Hayley shared two photos with Tyler in them as well. One of the photos shows the couple sharing a sweet smooch while Hayley rests her hand on her baby bump. The other shows the couple walking toward the camera as Hayley sports a bright smile.

Once again, Hayley placed her baby bump on full display, wearing a skin-hugging green dress. Check out the adorable photos below!

Day 4 of our 40 days away from "home." The definition of home becomes pretty relative when you're never really there. We make wherever we go our home, and for today, we're lucky to call home LA ?☀️?#homeiswheretheheartis #grateful pc:@justinmrusek

Tyler’s baby news isn’t the only exciting thing he has to celebrate this year. On Monday (September 4), Florida Georgia Line learned that they have been nominated for the CMA Award for Vocal Duo of the year.

The nomination comes following the success of the duo’s singles such as “May We All” and “God, Your Mama, and Me.” You can listen to the latter song in the clip below.

We can’t wait to meet Tyler and Hayley’s little girl!