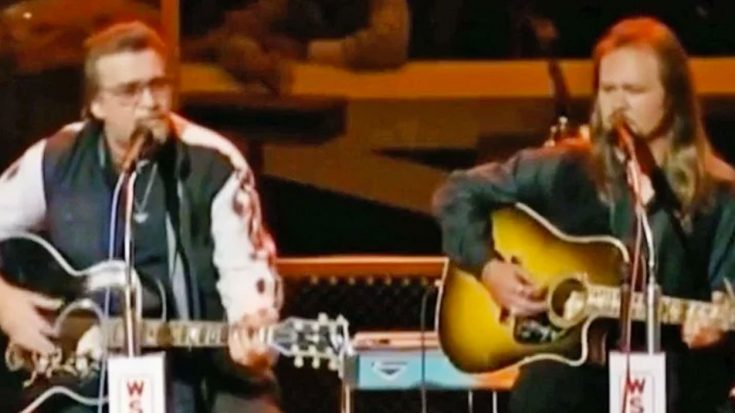 Travis Tritt was one of several new country singers that first came on to the scene in 1989. While these other singers from “the class of ’89” were known for their more traditional approach to country music, Tritt was instantly branded as a rebel and an outlaw.

It’s an image that Tritt came to embrace, and it ended up paying off for him. He’s now one of the most successful country artists of all time, with seven Platinum-certified albums.

Tritt had one of the best mentors that any country artist could ever ask for. Early on in his career, he got the opportunity to meet outlaw legend Waylon Jennings, and the two hit it off right away. They eventually became close friends, and Tritt had a great admiration for the man who had paved the way for country singers like him. He spoke highly of Jennings during a show in 2015, saying he was “like a second father” to him.

The connection between the two singers can be seen clear as day in some footage that recently resurfaced of the two of them singing together at the Grand Ole Opry.

Jennings and Tritt chose to sing “Where Corn Don’t Grow,” a song that each of them had recorded in the past. Jennings was actually the first to record the song and released it as a single off of his 1990 album, The Eagle. Jennings’ version made a modest showing on the charts and peaked at the 67th spot on the Billboard Hot Country Songs chart.

Tritt had better success with his rendition, which was released six years after Jennings’. His recording managed to break into the Top 10 on the chart and claimed the sixth position.

Since Jennings and Tritt never recorded a duet version of “Where Corn Don’t Grow,” their Opry duet is the best thing we’ve got, and it’s quite spectacular. Tritt and Jennings started off by singing portions of the song individually, all while country star Steve Wariner played along on guitar.

The moment that Jennings and Tritt finally brought their voices together was pure perfection. They seemed to feed off of each other’s energy and passion for the song, resulting in a chill-inducing performance.

Go ahead and tune in below to watch this unforgettable duet between two great country outlaws. We so wish that we could have been there that day!