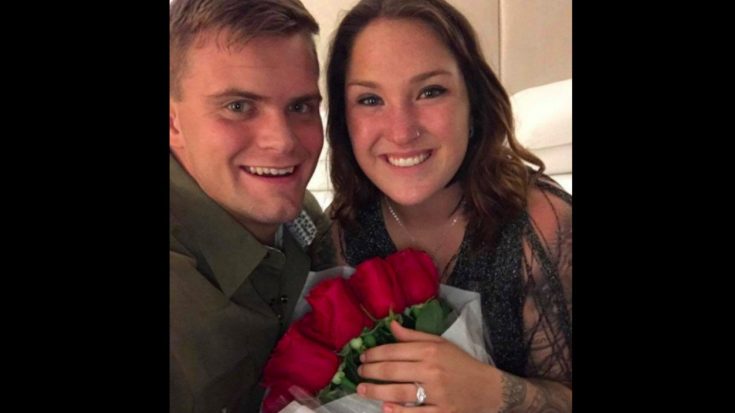 Allie Colleen Brooks‘ 21st birthday will be one she will never forget. Allie, one of three daughters of country mega star Garth Brooks, celebrated her milestone birthday in epic fashion thanks to her boyfriend, Jonathan Roberts, and her famous dad.

Allie surprised concert goers at the Forum in Los Angeles when she joined her dad’s backup singers and offered her stunning vocals to some of her dad’s biggest hits. While introducing his band, Garth brought attention to his little girl and asked the audience to join him in singing “Happy Birthday” to her. The moment captured on video showed Garth and Allie both getting emotional as the crowd of thousands sang.

If that moment wasn’t special enough for Allie, she was also surprised by her boyfriend when he popped the question backstage. In a video posted to Facebook by Jonathan Roberts, he can be seen hugging Allie. As she pulls away he slides down to one knee and holds out a ring. Allie begins to cry and says “yes” as her dad can be heard singing “She’s Every Woman” on stage.

It’s unclear whether the timing of Garth’s song was meant to coincide with Roberts’ proposal, but all signs point to a well-thought out plan as Roberts quoted the song’s lyrics in his Facebook post announcing the engagement.

“Wow!! LA was incredible. It’s definitely gonna be one to remember from 2 amazing concerts to jet skiing 40 miles up and down the coast. We Celebrated Allie Brooks birthday!!

“Also she said YES!!!! I’m beyond blessed to have this beautiful woman in my life.
She’s anything but typical. She’s so unpredictable.”

Congratulations to Allie Brooks and Jonathan Roberts on their engagement!