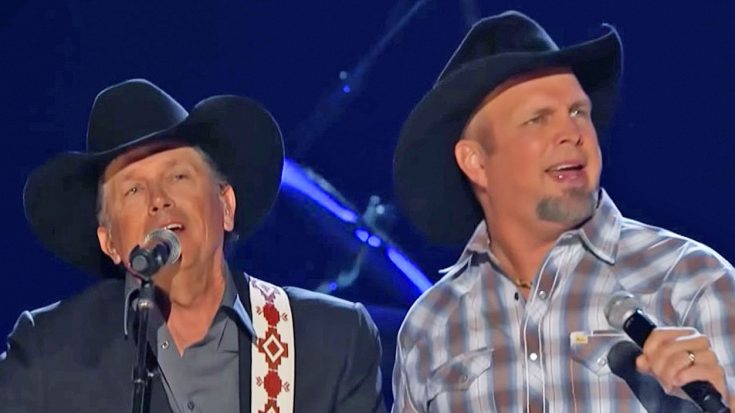 Out of his immense catalog of hits, “Friends in Low Places” is regarded as Garth Brooks’ signature song. It dominated the charts in multiple countries, and is considered one of the greatest country songs of all time.

To celebrate the 25th anniversary of “Friends in Low Places,” and the album it appeared on, titled No Fences, Brooks announced in 2015 that he was intending to release a new version of the song. Much to everyone’s delight, Brooks revealed this new version would be a collaboration with the one and only George Strait.

The “King of Country” wasn’t the only artist to join Brooks for the new recording. Jason Aldean, Florida Georgia Line, and Keith Urban all signed up to lend their talents to the tune as well.

Fans could hardly contain their excitement, and eagerly awaited the moment they’d finally get to hear Brooks’ collaboration with all of his friends. But his plans to release the recording came to a screeching halt due to royalty issues.

The audio to the song recently surfaced on YouTube, and it’s a country fan’s dream come true. All of the artists take turns trading lines throughout the song, giving everyone the chance to sing parts of the verses (but not the third verse, sorry!) and chorus.

We don’t hear Urban singing in the song, but he’s still credited on the track. So that must mean that he’s the one playing the guitar for all of his other friends, which makes this rendition even better.

No words can do this new version of “Friends in Low Places” any justice. So you’ll just have to check it out in the clip below!

Once you’re done, let us know what you think. Was it everything you ever hoped it would be?