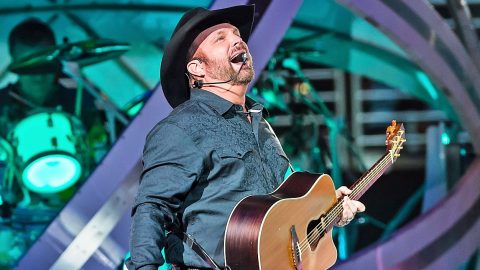 Anyone who has ever been to a Garth Brooks concert knows that he pours an endless amount of energy into his shows. His skills as an entertainer have not gone unnoticed, which is why he is the reigning CMA Entertainer of the Year, and is nominated for the award yet again this year.

In addition to putting on extraordinary shows, Brooks maintains one of the most grueling touring schedules of any artist in country music. Since September 2014, Brooks has been touring all over North America for his record-setting World Tour.

The tour has become massive in scale, with Brooks adding more shows to his schedule than he ever planned. Tickets sell out so fast that Brooks has often added several new shows to his tour stops. The tickets to those additional shows sometimes sell out as well.

Three years in, and the World Tour is still going strong. Brooks celebrated a groundbreaking milestone on September 4, which marked the three-year anniversary of the tour. Over the course of those three years, Brooks has performed over 350 shows.

To put all of that into perspective, The Guinness Book of World Records keeps track of the longest concert tour by a rock band. That record is held by the group Thirty Seconds to Mars, who performed total of 309 concerts on their Into the Wild Tour.

Although Brooks has enjoyed his time on his World Tour, it may be coming to an end soon. His website only shows 16 remaining concerts, with stops in Nebraska, Georgia, Indiana, and South Dakota. There is always the possibility he could add more dates, as he has a history of announcing new shows shortly before they occur.

In fact, the possibility of more tour dates is quite likely, according to his wife and tour partner, Trisha Yearwood. As she said during an interview in August, “This portion of the tour will be done in December.“

We’re sure there will be more shows in store after that, only somewhere other than North America. It is a World Tour after all!

“They say it’s a tour that won’t end,” Nash Country Daily quotes Brooks as saying. “I like the fact that this tour won’t end because the people won’t let it.”

Tune in below to watch one of Brooks’ entertaining performances from his World Tour. Congratulations to him for reaching the three-year mark with it!