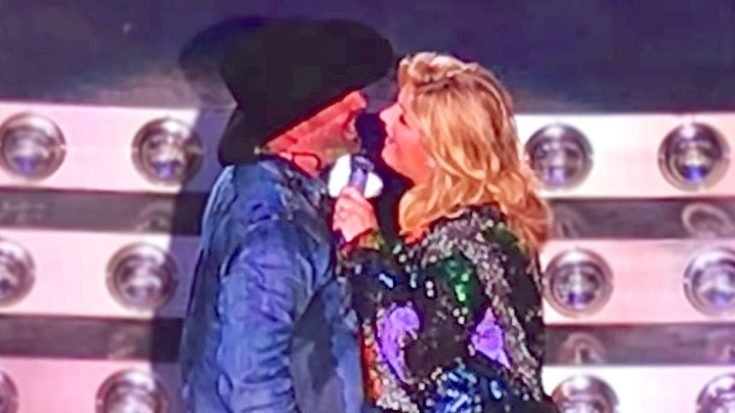 On Thursday night (October 12), thousands of excited country music fans turned out to watch Garth Brooks and Trisha Yearwood perform at their latest stop on their World Tour. The tour brought them to Atlanta’s brand-new Mercedes-Benz Stadium, and they became the first artists to ever host a concert there.

Unfortunately, the stadium apparently needs to work out a few bugs, as fans complained they couldn’t hear Brooks and Yearwood due to an echo.

Still, the sound issues couldn’t overshadow Brooks and Yearwood’s displays of talent. They separately sang a batch of some of their biggest hits before they joined forces on a romantic duet.

It’s no surprise that the passionate duet has maintained its popularity with Brooks and Yearwood’s fans. So you can bet that the Atlanta crowd was excited to watch them sing it!

The two started off on opposite sides of the large, round stage that was placed in the middle of the audience. As the performance continued, the two of them slowly started to walk toward each other until they finally met in the middle.

Once they did, their performance was filled with one PDA moment after the next. The two stood and faced the crowd with their arms around each other and held hands, but those weren’t the cutest displays of affection that they had in store.

Near the end of the duet, Brooks and Yearwood turned and moved so they were looking into each other’s eyes. They finished out the duet like that, standing mere inches away from one another with bright smiles on their faces.

Tune in below to watch the romance unfold in Brooks and Yearwood’s intriguing duet on “In Another’s Eyes.” Magic happens every time the two of them share the stage!