Saturday Only! Tailgate In Vegas With Your Favorite Country Stars For Only $25 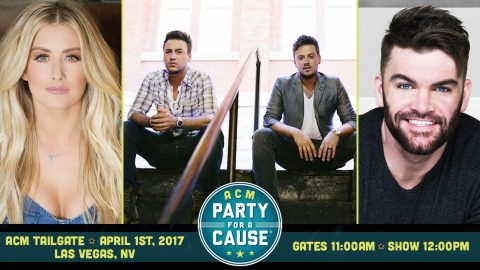 Have you been dying to get your hands on a country music festival ticket but can’t afford the price? Well then we have just the party for you! The biggest tailgate in the west is set to overtake “Sin City” for the 2017 ACM Awards kick off concert taking place in Viva Las Vegas.

The ACM Party for a Cause: Tailgate Party presented by Country Rebel and hosted by Stoney’s Rockin’ Country kicks off at 11 A.M. on April 1st with 15 artists set to take the stage. Packed with two stages, a plethora of countrified food trucks, and a massive dance floor, the night is shaping into the star-studded event of the year.

If the daylong party packed with some of the biggest names is the business isn’t enough to have you lassoing your boots and packing your bags, then the price for sure will! With tickets starting at just $25, what’s stopping you?

You can check out a video from last years ACM Party For a Cause below and be sure to purchase your ticket ASAP, because with a lineup this good at a price like that, it’s only a matter of time before they sell out!

GET YOUR TICKETS HERE!