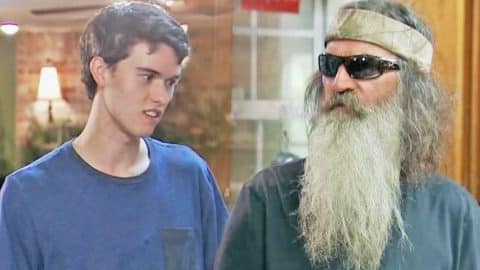 Growing up in the Robertson house, you were sure to get some good, Southern home cooking.

After John Luke Robertson married his wife, Mary Kate, they moved to Lynchburg, Virginia to attend Liberty University. The school is almost 1,000 miles from their hometown of West Monroe, Louisiana.

In a recent episode of Duck Dynasty, the young married couple return home from school to celebrate the graduation of John Luke’s sister, Sadie.

Their first stop was to John Luke’s grandparents house! Miss Kay and Phil pointed out how skinny John Luke has gotten and asked what he’s been eating at school without his grandma’s cooking.

John Luke kept rattling off a list of foods he and Mary Kate eat including tomatoes, kale, salads, and smoothies.

The conversation was filled with confusion, but we loved every minute of it!

Watch the hilarious clip below.