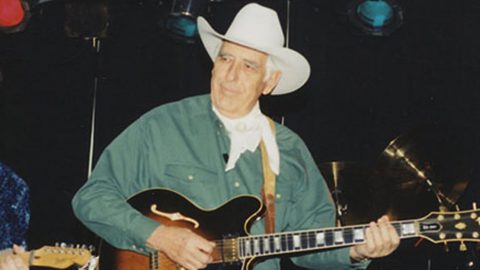 The country music world has lost another icon. A little over a week after Voice star Austin Allsup asked for prayers concerning his legendary father’s health, 85-year-old Tommy Allsup passed away on Wednesday (Jan 11).

Tommy rose to fame when he was a member of Bob Wills and the Texas Playboys. He also famously lost a coin flip to Ritchie Valens, giving up his seat on the plane that took the lives of Valens, Buddy Holly, and The Big Bopper in 1959 – an event known to the world as “The Day the Music Died”. Waylon Jennings also famously gave up his seat on the plane.

To honor the coin flip that saved his life, Tommy opened a club in Dallas called “Tommy’s Heads Up Saloon” years later. He later teamed up with Jennings, Willie Nelson, Tex Williams, Billy Maze, Charlie Rich, Bob Wills, and many more when he became a producer and A&R guy for Liberty Records.

A famed guitar player, his work can be heard on several iconic songs including The Everly Brothers’ “Cathy’s Clown”, Kenny Rogers’ “The Gambler”, and Buddy Holly’s “It’s So Easy”. According to Saving Country Music, he performed on over 6,500 recordings as a session musician.

He is a member of the Rockabilly Hall of Fame and was a huge supporter of Rockabilly and Western Swing.

Our prayers go out to Austin, who competed on the latest season of The Voice, and the rest of Tommy’s family during this time of grief. See Austin’s statement on his father’s passing below.