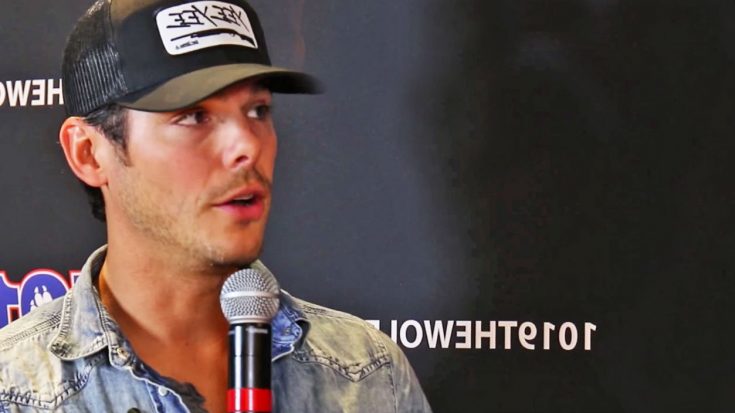 After breaking multiple ribs and puncturing his lung (and 30 hours in the hospital) this country star is opening up about what really happened when he feel from the stage last week.

Granger Smith (A.K.A. Earl Dibbles Jr.) is known for his hit country jams like “Backroad Song” and “If the Boot Fits” along with his wild alter ego, but he recently became the hot topic in the news cycle for another reason: taking a pretty nasty spill off the front of a stage.

During a concert in New Jersey on Friday, December 2nd, Smith was standing on a monitor at the front of the stage when it gave way and he tumbled down onto a metal barricade. He got back up on stage and finished out the song, but his remaining concerts for the year have been canceled.

In an early-morning interview with Bobby Bones, Smith explained what happened to cause the fall and revealed what was running through his mind right after.

“I had my foot up and I was just kinda leaning on it and trying to get closer to the audience and as my weight shifted that monitor flipped forward and I went with it off stage,” Smith told the radio host. “My first thought was ‘Well, this is embarrassing.’ And my next thought was the show can’t end like this!”

Smith also clued Bones into his current health status after heading home to Texas for recovery.

“I feel like especially yesterday I really turned a page,” Smith adds. “I feel pretty good. I have 22 perfectly operating ribs.”

We are so glad to hear that he’s doing much better and he’ll be back on the stage doing what he loves in no time!