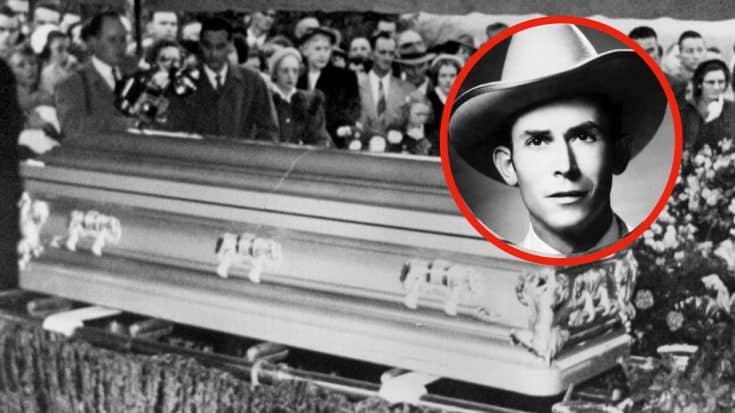 The world was rocked by news of music icon Hank Williams’ untimely death on January 1, 1953. Now, a haunting recording of his death announcement has resurfaced.

At the heartbreaking age of 29 years old, the singer lost his life on the way to a concert in the back of his famed Cadillac.

Slumped in the back seat of his baby blue Cadillac speeding through a dark night, Hank Willliams died New Year's 1953. His heart had given out. The country music legend was 29 years old. Hank Williams Museum in Montgomery, Alabama. #mymgm pic.twitter.com/08FcwJ8e1c

The announcement of Williams’ death was made on WCKY radio by DJ Nelson King. The short segment detailed the heartbreaking aspects surrounding the death of the singer and spoke of his vast accomplishments made during his short lifetime.  The announcement was followed by the playing of Williams’ “I’m Bound For That Promised Land.”

“The world of folk music lost one of its greatest performers and songwriters,” said King. “Hillbilly singer and composer Hank Williams died earlier today apparently of a heart attack while being driven to a radio singing date at Canton, Ohio.”

He Didn’t Want To Let Down His Fans

Williams’ driver, Charles Carr found the singer dead while stopped at a gas station a few miles out from Oak Hill, West Virginia. Prior to his death, Carr took Williams to the hospital earlier that day after the singer confided he wasn’t feeling well. After a few quick procedures, they were on their way to his show in an attempt to not let down his fans.

65 years ago Hank Williams was pronounced dead at Oak Hill General Hospital in West Virginia after dying in the backseat of a Cadillac, en route to a show in Canton, Ohio. #MusicIsLegend pic.twitter.com/MCK6XM6X0f

Williams had 11 No.1 hits on country radio in addition to several others cracking into the Top 10 and a star was placed in his honor of the Hollywood Walk of Fame in 1960. The singer was survived by two children, son Hank Williams Jr., and daughter Jett Williams.

64 years ago singer/songwriter Hank Williams Sr. died at the age of 29. He scored 36 Top 10 US country hits. #MusicIsLegend pic.twitter.com/Ucw5464ZDt

You can listen to the complete death announcement in the video below.