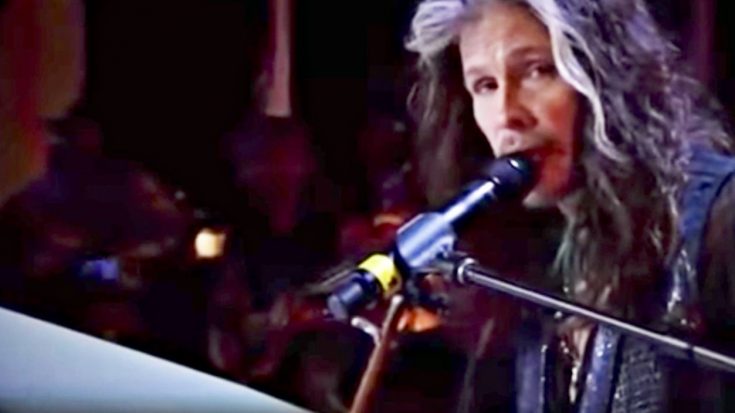 After his incredibly successful country album debut, this 69-year-old rock superstar unleashes a surprise performance of an Aerosmith classic that will leave you reeling!

Taking to the stage in this 2015 ‘Front and Center’ performance, Steven Tyler sits down at a gorgeous white grand piano with just a glass of wine and cheerfully talks with the audience, reminiscing about the good ol’ days and songwriting with Aerosmith.

“Actually you know what – I’m gonna play a different song first,” Tyler explained to the cheering audience. “So I said to Joe Perry, ‘Why don’t you play the right hand…and Brad, you play the left hand’.”

As he said this, he began playing a chilling, acoustic version of the introduction to “Dream On” – a massive hit for the rock band and one of the most recognizable songs in the history of music.

Tyler moves through the intro, showing off his musical talent on the piano like you’ve never seen it before and issuing a whole new sound to “Dream On” that will have you begging for more.

His raspy, aged and unique voice carries over the microphone throughout the opening verse and Tyler is joined by a guitarist and tambourine player that only add to the haunting nature of this intimate concert. This is truly one of the best performances of this song ever issued!

Watch Steven Tyler’s stunning acoustic “Dream On” performance in the video below and prepare to feel chills!