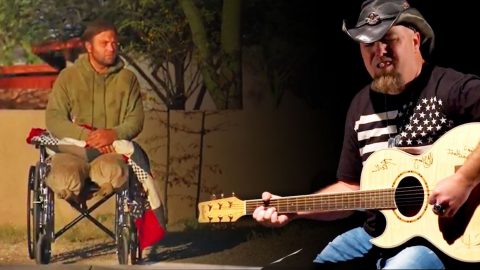 After waking up in tears with the haunting image of a man he’d seen trying to cross the street burned into his mind, country music singer Rowdy Johnson vowed he would return to where he had seen the veteran.

What began as a chilling dream, quickly turned into one of the most powerful musical statements about PTSD and how it’s affecting our veterans that we’ve ever seen.

Johnson, who is a United States Navy Veteran, poured his heart and soul out into both this incredible song, “Unwanted Man” and in a lengthy description of how the story, and song, came to be.

“‘Unwanted Man’ is the story of a Tucson Vet I met on the streets,” Johnson writes in the video’s description. “I’m ashamed to admit it, but I tried to look away and just drive by without asking his story.”

“Later that night I had a dream so real that it woke me up in tears. I dreamt every word of this song as I came to know this lost soul and helped bring him to a church where he was able to talk to God again. That dream was so vivid it shook me. I literally drove all over downtown Tucson that next day looking for him, but never found him.”

This new, powerful song is debuting on the album Battle Cry: Songs of America’s Heroes which is a collection of tracks written and performed by veterans with 100% of the proceeds going straight to the Valkyrie Initative – an organization dedicated to facilitating the transition of Veterans, First-Responders and their families.

Watch this amazing music video below that tells the story of a veteran Johnson met through his faith and connection with God.