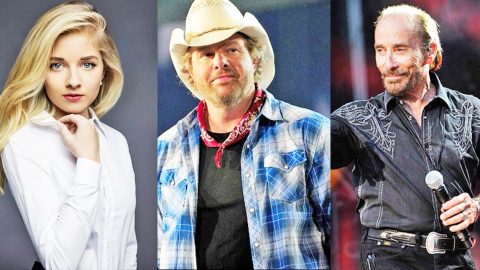 You won’t get an apology from the many artists who took part in the inauguration concert of President-elect Donald Trump.

The Make America Great Again! Welcome concert kicked off Thursday (Jan.19) with a wide array of performers including Toby Keith, Lee Greenwood, America’s Got Talent star Jackie Evancho, Three Doors Down and many more. With many musicians turning down their own invitations to perform at what is shaping up to be the most famous inauguration in American history, those who chose to take the stage have no regrets when it comes to accepting theirs.

Greenwood, who took the stage for a patriotic performance of his hit “God Bless the USA,” shared he’s in fact “sorry” for those who turned down the opportunity to perform.

“I feel sorry for them that they’re not going to be here to watch one of the most famous inaugurations of all time,” he said according to CNN. “If you’re an artist, entertainer, writer or singer and you’re on stage, you’ve been given a great gift. For [other artists] to stick their head in the sand and say, ‘we’re not going to be involved in this or want to see it,’ that’s just rude … I can only just feel bad for them.”

Arguably one of the biggest tickets on inauguration lineup, Keith faced harsh backlash after he was unveiled as a performer the week prior. The country singer, whom previously performed for both former presidents George Bush and Barack Obama, assured criticizers he has no regrets on his decision, stating according to TMZ, “I don’t apologize for performing for our country or military.”

The youngest to take the stage, 16-year-old Evancho shared that even with the harsh criticism she has recieved, she remains “extremely excited” but “nervous” due to the wildly negative press that has come her way.

“[Fans] are upset for the wrong reasons. I’m not involved in politics,” she said. “I’m doing this because it’s a privilege and an honor to perform for my country … it’s sad.”

So what do you think about their responses? Do you agree? Let us know in the comments! You can watch Toby Keith’s inauguration performance in the video below!

The concert at the Lincoln Memorial includes appearances by Toby Keith, Jon Voight, The Piano Guys, Lee Greenwood (Official), DJ Ravidrums, 3 Doors Down, The Frontmen of Country, military bands, and a fireworks show.