Is Blake Shelton Working On Another Duet With Gwen Stefani? 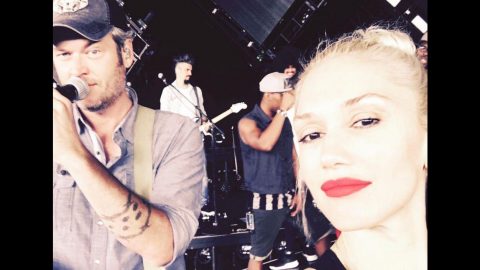 In a new interview the country crooner reveals that he has already thought about getting together with Gwen Stefani for another collaboration of music after their massively successful hit, “Go Ahead and Break My Heart”.

Blake Shelton and Stefani have been dating since late 2015 and have both been confirmed for coach positions on NBC’s hit television series, The Voice, for its upcoming 12th season – and along with that comes opportunity for the melding of talents!

Since the surprise release of their duet that was included on his latest album, fans have been wondering where this new relationship might take their music, and what crossover might happen with the two artists.

On the red carpet of the 2017 People’s Choice Awards, Shelton spoke with E! News about his two-trophy win, and dabbled on the topic of an upcoming collaboration with his sweetheart.

“I hope so! We always collaborate when we’re on the show together,” He reveals, adding. “Look, she’s an incredible singer-songwriter, and anytime I can get her to collaborate with me you’re damn right I’m going to.”

Both artists released an album within the last year, but only one of the albums featured a collaboration. While, we can’t predict the future, it seems like Blake Shelton’s gung-ho attitude at collaborating with Gwen Stefani and her incredible talent may be headed in the direction of a new duet.

Watch the full interview below and let us know what you think in the comments!