Jana Kramer Reacts To Being Eliminated On ‘Dancing With The Stars’

By Jennifer Pernicano on November 22, 2016
Advertisement 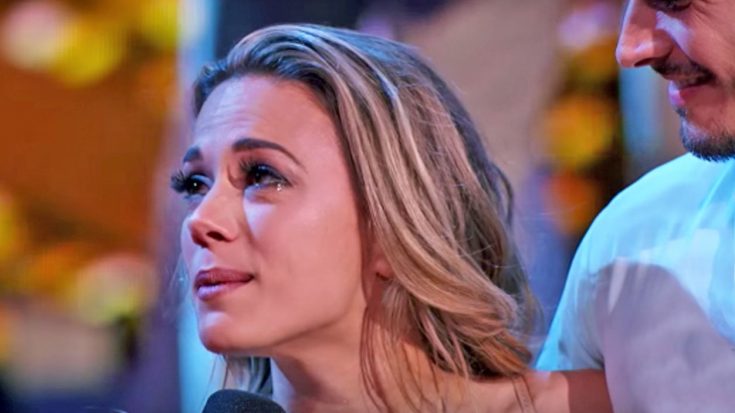 After battling the flu all week, Jana Kramer’s professional dance partner, Gleb Savchenko, still put everything he had into choreographing their dances for the Season 23 finals.

According to past DWTS champions, the freestyle is what can make or break you. All eyes were on Kramer and Savchenko as they readied their dance trying to tell Kramer’s story on Dancing with the Stars. She started out as a country singer/actress, but told her story of domestic abuse and became this strong, independent, unbreakable role model for women everywhere.

During their freestyle the two partners were connected by a sheet of material and performed a beautiful contemporary number. They had one misstep when Savchenko lifted Kramer and was running across the dance floor. Her dress got caught around his face and he stumbled, almost tripping.

They recovered extremely well and continued to deliver a solid dance. After a strong finish, Savchenko whispered to his partner, “I’m sorry,” knowing just how important the freestyle is in the competition.

Both seemed emotional during judging and scoring, and when the time came for the final elimination before Tuesday night’s finale, the looks on their faces were not surprised when their names were called.

“It was our time,” Kramer said after being eliminated. She later took to Facebook to thank Savchenko for this life changing experience.

Watch her freestyle and the elimination below.