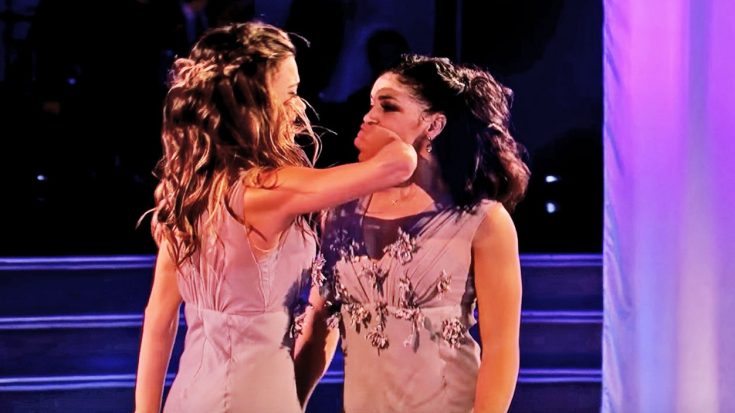 The country singer-gone-dancer shocked the audience after a severe injury had sidelined her partner late last week.

Performing in a team dance alongside Laurie Hernandez, Jana Kramer blew everyone’s mind when she brought someone nobody expected out on the dance floor with her.

That’s right, beyond dancing alongside the star olympian, she snuck in another surprise that caught everyone off guard.

Just last week, Gleb Savchenko had been pulled from Dancing With The Stars rehearsals after suffering a knee injury that folks close to the matter said could prevent him from competing in last night’s dance.

Even Kramer herself fueled that fire by suggesting that she would be partnering with Alan Bersten and called him “the new Gleb” in a social media update.

“I don’t know if Gleb’s going to be OK, but it’s not looking good…” she told fans this last week.

While all bets were on Savchenko being benched for Monday’s show, Jana Kramer pulled out all the stops when she twirled over to meet Savchenko mid-dance – and the audience went WILD!

Together Kramer with Savchenko, Hernandez, and Val Chmerkovskiy they stole the show and earned a perfect score for their contemporary dance!

Watch the full performance in the video below and let us know if you, also, were surprised by Gleb’s appearance!