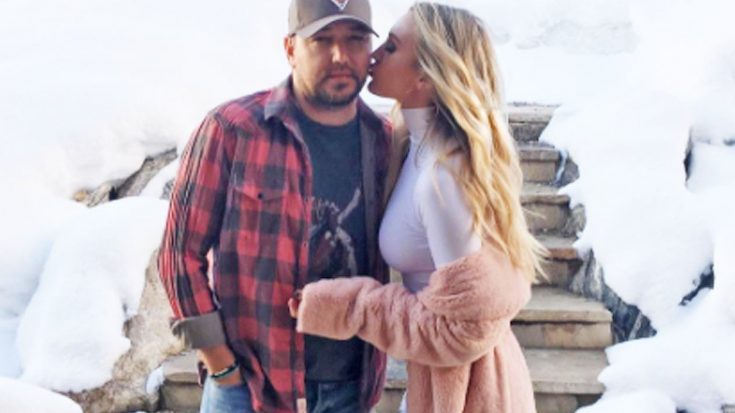 Prior to announcing they have “a bun in the oven,” Jason Aldean and his beautiful wife Brittany had become relatively silent on social media. While the socialites have resumed their regularly scheduled social media presence, they had yet to comment on Brittany’s pregnancy since their announcement.

SURPRISE!!! WE ARE PREGNANT!!! This was the hardest secret we've ever had to keep ? This journey for us has been full of many happy times & also many tears… The biggest rollercoaster we have ever been on, without a doubt! All of the moments of heartache were followed by the biggest blessing in the entire world!! We will never take one moment for granted & can't wait to meet you, sweet baby!!! ???

The couple managed to keep their miracle a secret amongst the constant pregnancy rumors. Now that the dust has settled from their joyous announcement, the country singer met up with Chicago-based radio station Big 9.55 for an interview, the boys at the station surprising him with an impromptu baby shower and all the questions on everyone’s mind.

“It’s been a while. I gotta relearn how to do all this stuff,” Aldean said.

Aldean has two daughters, Kendyl (9) and Keeley (14), from his previous marriage to Jessica Ussery. While Brittany plays a critical role as step-mother to the adorable little girls, this is her first time having a child of her own, and from the sound of it, she couldn’t be more excited!

“My wife is all over that stuff,” Aldean said when asked how the nursery is coming along. “She’s been pretty good. She hasn’t been sick at all, which has been great. She’s been really tired, that’s the thing. She likes to sleep a lot these days.”

Can’t blame her being tired when she’s growing a little miracle! While no gender or due date has been revealed, we’re overjoyed to hear that her pregnancy is coming along well.

We threw an impromptu baby shower for Jason Aldean!!