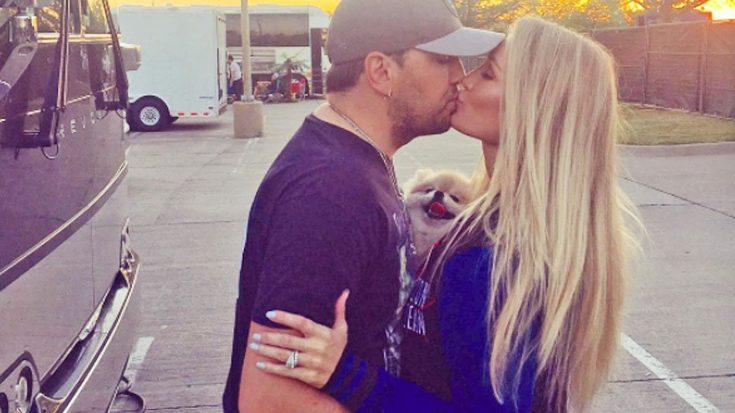 Cancer possesses the power to destroy families. Following her joyous announcement she and her country crooner husband are pregnant with their first child together, Jason Aldean‘s wife Brittany gave a health date on her beloved furbaby.

The blonde beauty’s adorable bulldog Butterball had to undergo another round of chemotherapy after it was discovered his cancer they thought he had kicked last year in 2016 had returned. Now at the end of yet another round of treatment, Brittany shared an emotional update on her adorable best bud.

“The sweetest boy in the world has his last chemo appointment today!!!” she wrote on an Instagram post attached to a photo of her with “Mr. B.” “Let’s pray the cancer is gone for good this time!! My angel is such a trooper!!!“

The sweetest boy in the world has his last chemo appointment today!!! Let's pray the cancer is gone for good this time!! My angel is such a trooper!!!????

Brittany is a major animal rights activist, making the decision herself to abstain from eating meat and live a vegetarian lifestyle. In addition to announcing they will be having a child, Brittany and Jason recently announced to fans that they adopted an adorable puppy named Boss.

Please join us in sending prayers their furbaby’s way.