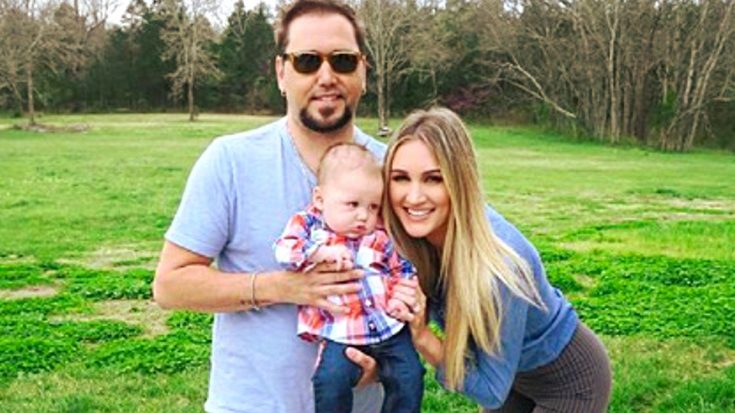 On December 1, 2017, Jason and Brittany Aldean welcomed their first child together, a son they named Memphis. “HANDS DOWN THE HAPPIEST DAY OF MY LIFE,” wrote Brittany in the Instagram post that announced Memphis’ birth.

The post also included a photo of the proud parents with newborn Memphis, and it was clear they were already smitten.

Hard to believe it, but Memphis is now four months old. The little guy has grown up right before country fans’ eyes, as Brittany has kept them updated every step of the way with new photos and videos almost daily.

Memphis’ bright blue eyes have always been the source of compliments, and they’re standing out more than ever now that he’s older. He donned a pair of blue headphones in a recent photo Brittany shared, which really made the color of his eyes pop.

It’s understandable why staring into those baby blue eyes has already given Brittany renewed baby fever. During a guest appearance on the podcast Babes and Babies, Brittany shared her plans for baby #2, and they’re pretty immediate. ﻿﻿

As Brittany explained, she and Jason may be ready to have their second child together much sooner than anyone ever thought. When she was asked when that would be, she said “the sooner the better.“

Brittany’s theory is that by keeping their children close in age, it will keep them from needing to “start all over again” with another baby in a few years:

To go along with her podcast appearance, Brittany shared a personal video of herself during labor with Memphis. The video shows Jason adjusting the TV when Brittany suddenly starts having a contraction.

Jason takes the camera while Brittany works through the pain like a champ. After watching this video again, is she really sure she wants to have her second child so soon?

But who knows…based on the way she talked it’s likely that baby #2 could be here within a year!

❣️Y’all go check out the BABES and BABIES podcast (link in bio) for all the unfiltered details of labor, mommyhood, road life and everything in between! I had a blast talking with these girls!!! ????