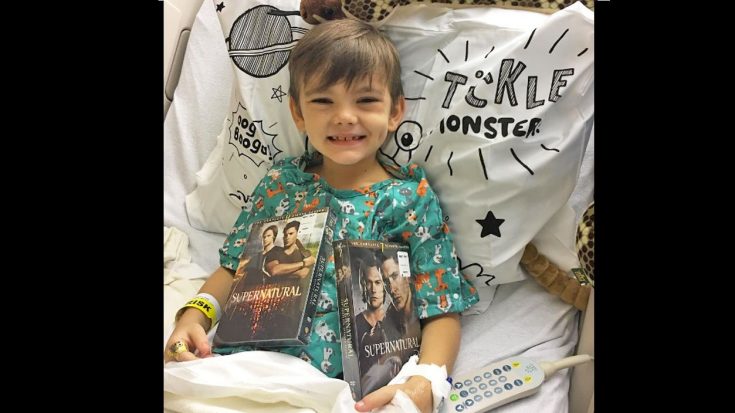 Thanks to the Duck Dynasty spin-off show Jep & Jessica: Growing the Dynasty, we were able to get to know the youngest Robertson brother, Jep, his wife, Jessica, and their family a little better.

Together, they have four biological children, Lily, Merritt, Priscilla, and River, and recently adopted a baby boy, Gus. The show followed the family navigating life with a newborn and with five kids now, there was always a lot going on.

We learned that all the kids love sports, music, dancing, and spending time together. Unfortunately, the show was cancelled after just one season, but we loved every second of it.

River, who was the only boy, was excited to finally have a brother and be able to do boy things with him, instead of being tormented by his older sisters who enjoyed putting makeup on him!

A few weeks ago, River got really sick to the point where Jep and Jessica had to take him to the hospital. In an Instagram post, Jessica shared a photo of River, who was all smiles, and revealed he had been in and out of the hospital for a while and had a procedure done.

A few days later, the family was on a plane back to their hometown for Reed’s wedding and Jessica took to Instagram to explain just how bad River’s condition was.

“Seeing him run fever [sic] for 5 weeks and doing test after test… then two weeks in Austin seeing a pediatric urologist and more test and first procedure to figure out what’s going on in that little body,” she wrote. “He’s doing soooo much better today, smiling some and playing video games… not in as much pain as the day before!”

She also thanked God for “taking that pain away [and] letting us find this issue out now before it had any lasting damage on his kidneys”. Although it seemed that River was out of the woods, Jessica kept saying “first procedure”, which had us wondering when the second would be. Our questions were answered on Tuesday night (Nov. 29).

She took to Instagram once again to reveal his next procedure on Wednesday (Nov. 30).

“The night before River’s next procedure,” she captioned the photo of the seven year old playing on his iPad. “Prayers are much appreciated!!! God is good and I believe in the power of prayer!!!! I’ll keep you posted tomorrow!! Love y’all!!! Sending some thanks too to my amazing husband for taking care of all our other babes at home and letting me focus on our River!”

We are sending our prayers to River and the Robertson family that his procedure goes well.