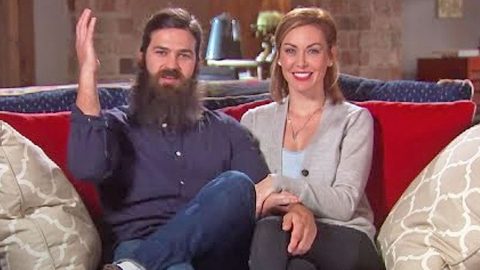 Fans were crushed in August 2016 when Jessica Robertson announced that her family’s spin-off show Jep & Jessica: Growing the Dynasty would be ending after only one season.

The silver lining was that they would still be a huge part of Duck Dynasty, but we were saddened to find out a few months later that the hit reality show about the Robertson clan would also be ending.

Fans of both shows were devastated and wondering when a family friendly, faith-based show would ever return to television. Well, wait no longer!

The preview shows Jep, the youngest Robertson brother, surprising his family with a food truck that he bought without his wife’s knowledge, which he thinks will rake in the cash! His family seems extremely skeptical, and we can’t wait to watch what happens next.

A few hours after Duck Dynasty shared the preview on Facebook, Jessica finally broke her silence on the matter.

So excited to finally announce that we got a 2 season of #JepandJessica starting Wednesday February 22! I hope y'all join us on this fun season! Lots happening! Can't wait for y'all to see how much the kids have grown! #faith #family #funzies @aetv @duckdynastyae @jeprobertson @officiallilyrob @officialmerrittrob

See the preview for the new season below!

Make it rain with a new season of #JepAndJessica Wednesday, February 22nd on A&E!