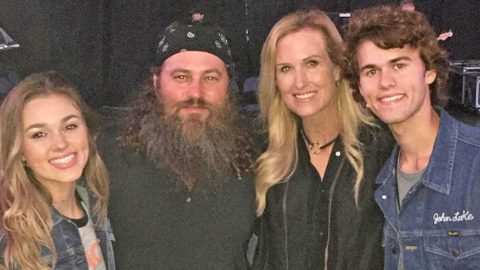 The Robertson brothers, who star on the reality show Duck Dynasty, have made a name for themselves and along the way, have made long hair, and long beards their trademark look.

Willie, Jase, and Jep Robertson, along with their father, Phil Robertson, and their crazy Uncle Si all sport long dos and even longer beards, making them extremely recognizable even to people who don’t watch the show. The eldest Robertson brother, Alan, has short hair and no beard. He is often referred to as “The Beardless Brother”.

Willie and his wife, Korie, have six children together: Rebecca, John Luke, Sadie, Little Will, Bella, and Rowdy. John Luke, their eldest son, has famously not grown a beard for a few different reasons. In an interview with The Church Boys promoting his book Young & Beardless, which is also his Instagram handle, John Luke revealed why he doesn’t sport a beard.

“I do have interest in growing a beard,” he said. “My face just isn’t with the program. Right now, I can get a little something, but it’s just kind of scraggly. I wouldn’t even call it a beard.”

In recent months, thanks to social media, we’ve noticed that it looked like he was trying to grow a little beard. John Luke’s wife, Mary Kate, often shares blog posts about their life together and in her most recent one commemorating the new year, she shared a picture of John Luke sporting a FULL BEARD!

Even though we know Duck Dynasty will be coming to an end, John Luke looks like he’s getting ready to join the ranks of his dad and uncles! Which look do you like better? Clean-shaven or full beard?!