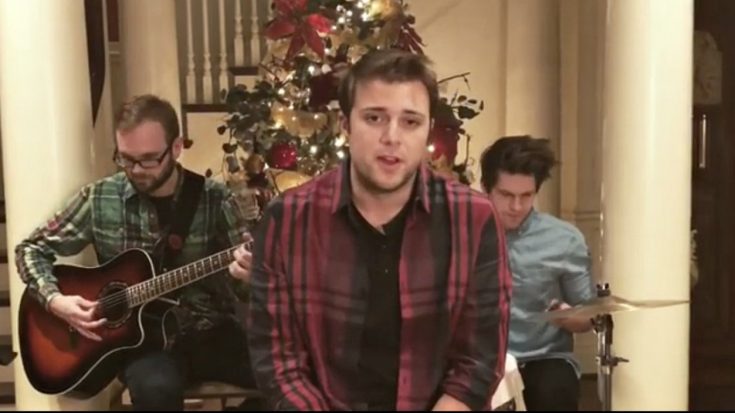 Few stars were bigger than John Michael Montgomery in the 1990’s. With chart-topping hits such as “I Swear” and “I Love The Way You Love Me,” Montgomery secured his place in country music as the ultimate balladeer.

Now Montgomery’s son is following in his famous dad’s footsteps. The first time we heard Walker Montgomery sing was when we stumbled upon a video of him singing his dad’s debut single “Life’s a Dance.” Not only did Walker inherit his dad’s classic good looks, but his smooth voice as well.

In the months since, the younger Montgomery has shared cover videos of songs such as Keith Whitley’s “Don’t Close Your Eyes” and Bill Monroe’s “Blue Moon of Kentucky” as well as some of his first original tunes like “Simple Town” and “Just Say When.”

One year ago he appropriately released his take on the holiday classic “Have Yourself a Merry Little Christmas.” In the video  posted to social media, Montgomery sings the familiar lyrics in front of a Christmas backdrop accompanied by a small band. Close your eyes and you might just think that you’re listening to John Michael himself. Walker’s vocals are so reminiscent of his dad’s that we can’t help but find the song to have a nostalgic feel, and we can’t stop listening!

Check out Walker Montgomery singing “Have Yourself a Merry Little Christmas” below, then scroll down to hear Walker’s latest original release, “Just Say When.”

I hope you all enjoy this cover of Have Yourself A Merry Little Christmas! Wishing everyone a Merry Christmas and Happy Holidays! @evanhammons @fuzzymuffintop