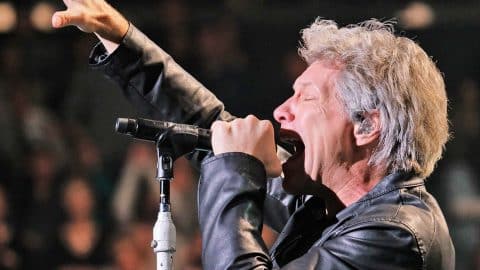 Jon Bon Jovi proved, once again, that he can sing just about anything. The legendary rocker already has a No. 1 country song under his belt with Jennifer Nettles.

Their song “Who Says You Can’t Go Home” was a Top 25 hit for his band, Bon Jovi, in 2005, but when Nettles lent her voice to the track, it shot straight to No. 1 on the country charts the next year.

At a Little Rock, Arkansas show in 2013, Bon Jovi told a story about how he sang Conway Twitty‘s song “It’s Only Make Believe” for President Clinton’s 50th birthday.

The President later came up to him to thank him for covering the classic and showcasing a fellow Arkansas native. Turns out, Bon Jovi had no clue Clinton was a huge Conway Twitty fan, or that Twitty was also from Arkansas!

While sound-checking before the concert that night, he says he had the urge to play “It’s Only Make Believe” and decided to play it for the packed Verizon Arena. He kicked off the song with a sultry growl and thrilled fans with the awesome cover.

Twitty first released the song as a single in 1958 off his album Sings. It went number one on the pop charts in both the United States and the United Kingdom.

Bon Jovi made the crowd go wild for this fan-favorite song.  Listen to his impressive cover below.