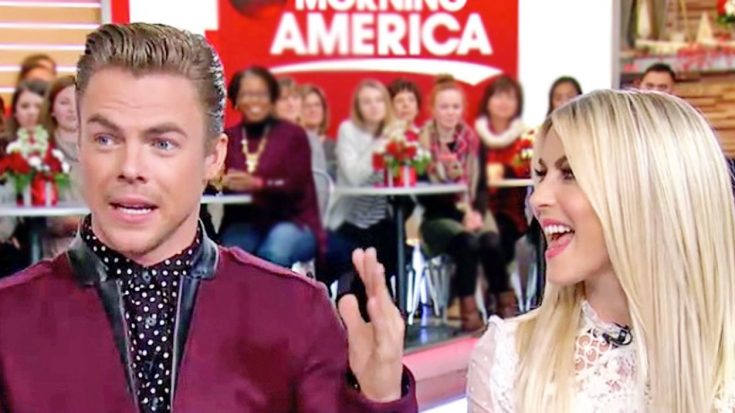 Talented siblings Julianne and Derek Hough never seem to slow down. In between seasons of dancing and/or judging on Dancing with the Stars, the two have appeared in movies, starred in live TV musicals, and in Julianne’s case, recorded a country album.

The siblings had an especially busy schedule in 2014, when they kicked off their first Move Live on Tour. Julianne and Derek travelled to over 40 cities on the tour, entertaining massive crowds with their singing and elaborately choreographed dances.

After they sold out all of their tickets to the first tour, Julianne and Derek went on a second one in the summer of 2015. Once again, the tour was completely sold out. Needless to say, the demand for a 2016 summer tour was high, but the siblings surprised everyone when no announcement came.

But there’s no need to wait any longer. Earlier in the week, Julianne and Derek had been teasing on their social media accounts that they had a really big announcement to make on Good Morning America on Wednesday (December 14). The short videos that the Houghs shared really made it look like another tour was in the works, and fans suspected as much.

Their thoughts were right on point. Julianne and Derek officially announced they are embarking on a third Move tour called MOVE BEYOND Live on Tour. The tour kicks off this spring on April 19th in Akron, Ohio, and takes the Houghs across the country. You can see a full list of tour dates and locations here.

Julianne wrote about the tour on her blog, saying it is “like nothing we’ve ever done before.” She said the show will be inspired by the four main elements: earth, wind, fire, and water. According to Julianne, fans can also expect to see “an all new stage and incredible choreography.”

Tune in below to watch Julianne and Derek’s full video announcement about the new Move tour. This has to be one of the biggest announcements of their career!

Will you be catching the Hough siblings on tour this spring/summer? We can’t wait to see them!