Julianne Hough And Brooks Laich Have An Exciting Reason To Celebrate 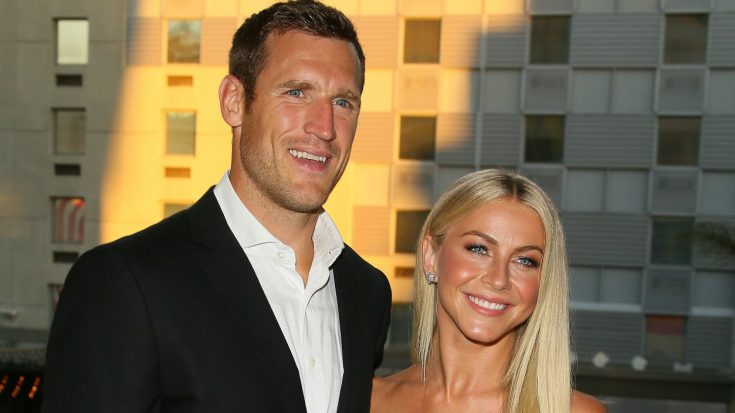 Julianne Hough and her hockey star husband, Brooks Laich, are still celebrating their summer wedding, but now they have another reason to celebrate! In an inspirational story of hope and resilience, Laich is seeing his long-time dream coming true.

Laich, a 12-season NHL veteran, spent the majority of his career as a forward for the Washington Capitals. But, after becoming engaged to Julianne Hough in 2015, Laich moved to Los Angeles to be near her and dreamed of playing hockey for LA’s hometown team, the Kings.

“That would be the dream. To be able to be at home with my wife is very important to us. We’ve done long distance for three-and-a-half years. And to be able to continue my hockey career would be a dream,” Laich said.

Brooks continued to play for the Toronto Maple Leafs minor league franchise until his contract expired this summer. His next move was to call the Kings to see if there was a place for him on their roster. The interest was mutual so Laich signed a tryout agreement with the Kings and participated in their training camp, but was eventually released.

Unwilling to give up on his dream, Laich continued to practice with the team and was prepared to workout alone, if necessary, through the end of the year in case an opportunity came his way.

Well, the opportunity for the 34-year old to return to the NHL presented itself after one of the Kings’ major offensive players, Jeff Carter, was forced to undergo surgery after an opposing player’s skate cut through a tendon on his leg. The injury allowed the L.A. Kings to sign Laich to a one-year contract with an Annual Average Value (AAV) of $650,000.

“I’m forever in debt to the L.A. Kings. I’m just grateful for the opportunity. You get to this stage of my career, the game means so much more and you’re more grateful for every day, but there’s still so much in me that I want to give and so much I want to do in this sport,” Laich said. “I still feel like it’s my first day in the NHL. I feel young – coming to the rink with so much energy, the body feels great. There’s just so much left that I want to accomplish. I’m definitely not finished yet.”

Laich shared the news on social media Thursday saying, “Don’t ever give up on your dreams. Ever. Resiliency rules the world!”

Don’t ever give up on your dreams. Ever. Resilience rules the world! So grateful for the @lakings and the opportunity they have given me to continue playing the game I love! Special thank you to my wife, my family, my friends and everyone that has helped me get here today, much love to you all! Now let’s go win some hockey games! #gokingsgo #lakings ?

We couldn’t be more excited for Brooks and Julianne!