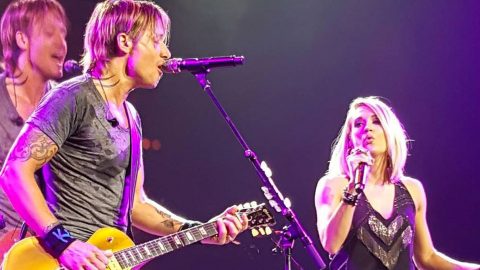 These two endlessly-talented country stars deliver the performance of a lifetime when they unleash this dazzling cover during a tour stop in Canberra, Australia.

Keith Urban and Carrie Underwood had been traveling around the land ‘down under’ since they kicked off the Oceania Leg of Urban’s ripCORD World Tour – and they clearly had a blast!

As they were nearing the end of the tour in December 2017, they’d been adding some extra flair here and there, doing fun things outside of the normal set list for fans to enjoy.

Recently, Urban brought a talented Australian fan on stage and let her perform an original song in front of the massive crowd!

But in this new showcase, Urban and Underwood pull out all the stops and honor two legendary artists with a duet that will leave you craving more!

Taking on one of the biggest songs from the 1980s, Underwood and Urban pair up for a smash-hit cover of Stevie Nicks’ and Tom Petty’s “Stop Draggin’ My Heart Around”!

Truly magical, these two had the crowd pumped up and belting out the words alongside them as they showed just how unstoppable they are together!

Watch this dazzling performance below and let us know what you think in the comments!