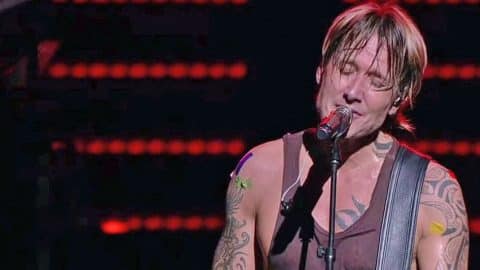 Less than a week after the horrific shooting that took place in Orlando, Florida, Keith Urban performed a sold-out show just two hours away in Tampa, Florida.

The concert would not be complete without honoring those victims and the families involved, and Urban knew that. The shooting, which has become the largest mass shooting in American history, has not only affected the people of Orlando and the state of Florida, but the entire nation.

Addressing the crowd before playing a song for the victims, Urban acknowledged those who travelled from Orlando.

“I want to say something that’s been on my heart for the last week. I know we got a lot of folks here from Orlando tonight,” he said. “And although I didn’t know anybody in that horrific incident, I did because they’re just guys and girls, brothers, sisters. They had dreams, and hopes, plans, just like every one of us. So I know them like I know you guys.”

He began playing a stripped down version of U2’s 1993 song “One” and the audience fell silent. Accompanying himself on the guitar, the performance was powerful and meaningful.

“One” has been called one of the greatest songs of all time by Rolling Stone Magazine, for good reason. The lyrics take on a whole new meaning when honoring the Orlando victims and Urban shows that in his face during the entire performance.